Dealing with sudden, inexplicable fails got me to try some new things. I don’t know which, if any, are related to why my Cerberus 3D Gigante 3D printer just stopped cold without apparent reason, but it sent me back to play with a host program I’d only used once or twice before.

In fact, when my 3D printing guru suggested I use Pronterface instead of Repetier, which we thought might be the problem, I remembered I had a version of it. It was old, so the first thing I did was download the latest version of this venerable – well, for 3D printing! – host program.

Pronterface is apparently one of the most common interfaces used by 3D printer software. It can move and home all 3 axes independently, as well as offering a temperature graph, extrude and retract buttons, a window showing the current layer’s tool path, and a window to enter G-code. Some users complain that it’s too basic or don’t like the program’s look and feel, but it seems very clean and easy to use to me.

The big question is whether and how it works ….

Pronterface is part of the Printrun suite, which also includes Pronsole, an interactive command line host for people who prefer consoles and Printcore, a standalone, non-interactive G-code host. Since I’ve been happy enough with my slicer and can only hope I don’t need to get in and edit G-code again, I’m just using Pronterface. 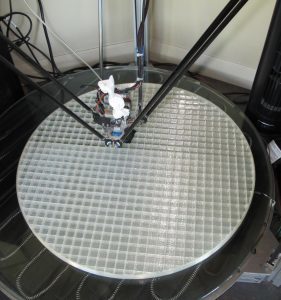 The first challenge I’ve given it is to print the top for the end table created when a power outage killed one of my large format 3D prints. I’d hoped to use a glass top on it to diffuse the light I installed in the table’s base, but the narrow base of the table was too weak to support the glass.

Back to the drawing board!

I decided to print a top in neutral filament. I’m on my fourth try now. Two pulled up off the print tray, and one I failed myself when I was trying to change filament in the middle of the night and hit “restart” instead of “resume” – the two buttons are right next to each other and look alike. (I now understand I can customize the screen. As soon as this print is done ….)

After two days of printing,  it looks like it might make it, but I won’t say that out loud – yeah, I’m superstitious!

Printing anything with such a broad footprint, like this 25″ diameter piece, is always tricky, because the work can pull up off the print tray no matter whether it’s heated or how much hair spray I’ve put down. Thus far, though, things are looking pretty good.

And Pronterface? It’s running like a champ – but don’t say it out loud! It should finish printing about midnight tonight. All prayers accepted ….