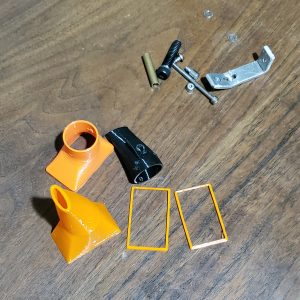 Over the years that I’ve owned my 8-foot-tall Cerberus 3D Gigante 3D printer, the owner and chief engineer of Cerberus 3D, Steve Graber, and I have made a lot of changes to it. Some have been minor, like replacing the struts, while others have been major, like upgrading the extruder and adding a heated bed.

Recently, I decided to take on a little project on my own: remounting the cooling fan.

The fan was attached to one of the struts and had an articulated tube that went from the fan to the nozzle, which was aimed on the print. Well, that was the theory, anyway.

Having the fan attached to the strut meant that it moved constantly, which then moved the nozzle constantly, too. Eventually the fan moved so much I just quit using it.

Now that I’ve been playing with PETG, cooling the print at critical curves seems more important than ever to avoid distortion. It was time to fix the cooling fan.

Cue one of my 3D printers. I used my Cerberus 3D 400 for this project because the part is small enough, and the 400 is sitting on my desk where I work in CAD. That made it easier to tweak the design as I went, something I really needed to do to get just the shape I wanted. 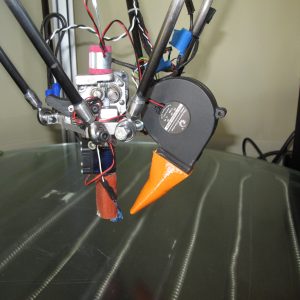 The biggest innovation, though, was to attach the nozzle to the fan itself and mount the fan on the support for the hotend. That meant I could get rid of the articulated tube, too, and let the fan point the air directly on the print. Fewer parts, fewer problems.

It took about 4 tries to get the connection to the fan exactly right and to shape the nozzle the way I wanted it. The original one was flat and elongated; the new one is oval.

The maiden voyage for this little innovation is coming up soon, but I’m pretty confident it will do the job better than its predecessor.

Once again, the ability to make custom parts inhouse using a 3D printer really pays off.