One of the great things about my Cerberus 3D 400 3D printer and its big brother, the 8-foot-tall Cerberus 3D Gigante now that I’ve upgraded it, is that I can use more types of filament.

Perhaps the most exciting new option is PETG, which has the strength and durability of ABS and the printing ease of PLA. 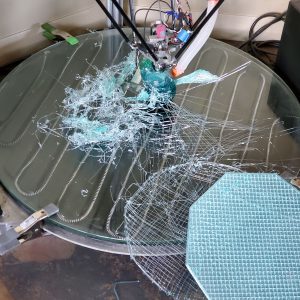 So far, my adventures with PETG have been a whole lot less fun than printing with PLA.

I did get 1 decent print that I’m testing in the outdoor winter elements in New York, but 2 attempts to print a larger sculpture in PETG have ended in nothing less than disaster.

Part of the problem is that I’ve gotten seduced by printing with PLA, starting a large print in the evening after coming home from my metalworking studio, then checking the print occasionally through the night if I’m not sleeping well, or at the very least checking it the next morning.

I say “checking” because most of these large prints, including the 1 I’ve now attempted twice, take a long time – this one is estimated at 40 hours.

When I suffer a fail with PLA, I usually face an aborted print, some material loss, and maybe a bird’s nest of filament. With PETG – at least these 2 times – the 3D printer just kept merrily running. The filament wrapped itself around the hotend, which is much hotter than when running PLA (PLA runs at 200 degrees centigrade, PETG at 235) and melted into a rock hard chunk around the hotend.

I then got to spend 5 hours sawing and chipping away to remove that chunk from the hotend.

I thought briefly of just getting a new hotend, but we’re talking $500 I’d rather not spend. The thermister and boden tube got trashed, but those were much more reasonable to  replace.

Heat – or the lack thereof – seems to be the culprit. In the first catastrophic fail, I don’t think my print bed was warm enough. It needs to be 80 degrees centigrade for PETG, where PLA only requires 60 degrees centigrade. The second time I made sure the bed got up to 80, but I think when the house temperature dropped to its night level, the 3D print cooled. In both cases, the sculpture popped off the bed and the rest is history.

I won’t give up – I have 4 15-pound spools of beautiful PETG – but I will make sure I’ll be around the next time I tackle 3D printing PETG.