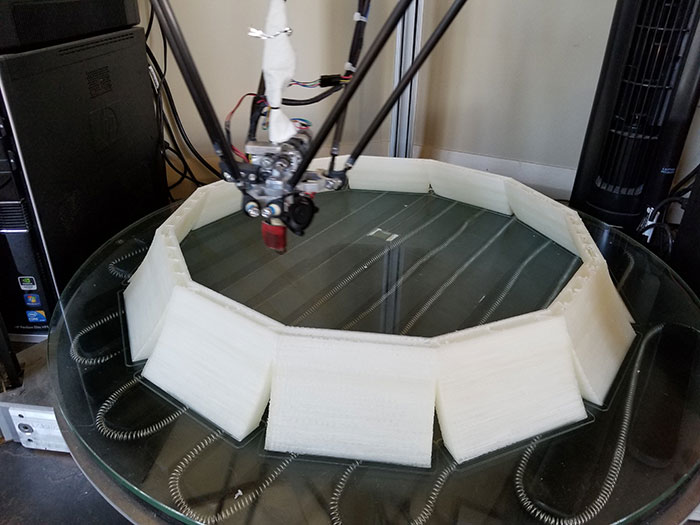 About a week ago I decided to tackle a project I’ve been thinking about for a while. I have a beautiful glass tabletop and thought it would be fun to 3D print a base for it.

Fun?! I like to go into a project thinking positively, but maybe that just set me up ….

Anyway, the first day of what would be a 5-day print went fine. It was when I had to change out the 5-pound spool of PLA filament on my 8-foot-tall Cerberus 3D Gigante 3D printer that things went terribly wrong.

The print paused normally, then I switched out the spool of natural filament and loaded up the new spool. When I tried to resume the print, though, everything went haywire. The printhead swung wildly out of position, and the print was lost.

I was ready to pull my hair out! A whole $100 spool of filament and a day of 3D printing had been lost. Not to mention the frayed nerves.

Then Steve Graber, the man who built the Gigante, told me about the switch …. 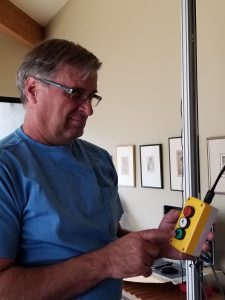 I wasn’t the only one having this problem, so Steve had come up with a switch that bypasses the computer and software and is hooked directly to the firmware. It lets me Pause, Resume and Reset the 3D print manually.

He came by this morning and installed the switch, as well as dealing with another problem with the printer.

As he says, “All 3D printers have problems, but when these big printers fail, they fail spectacularly.” I can attest to that! I’ve said that we are in the Model T days of 3D printing, which is certainly true for consumer models as opposed to industrial ones, so I know someday we will look back and laugh, but I guess I’m not there quite yet.

Anyway, we got the switch set up, and tested it a couple of times, pausing and resuming with a test print until we were satisfied that it works.

Now I just have to get my nerve (and nerves) back up to start that big print again ….