Your chance to see my 8-foot-tall 3D printer running! 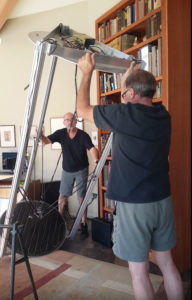 Not everyone has seen a 3D printer running.

Some people have seen the most common types – which are about as big as a standard computer printer – running.

If you live in the metro Phoenix area, though, this could be your chance!

On Saturday and Sunday, November 13 – 14, I will have my Cerberus 3D Gigante 3D printer running, and you are welcome to see it.

It’s all part of the Camelback Studio Tour, and seeing people’s eyes light up when they finally “get” how 3D printing work is really cool.

I or 1 of my compatriots will enjoy explaining how it works, but it’s actually pretty straightforward. Built by 3D-printing guru Steve Graber, the Gigante is based on open source instructions available online.

But as Steve and I have learned – and you have, too, if you are a regular reader – scaling up a design this dramatically creates some real adventures. I joke about it coming with all the bugs built in, and it’s only because I can finally laugh at some of the grief we endured getting this giant printer, which can output a 4-foot-tall 3D print, running. We had problems with the struts, the carriages and other hardware as well as software (no one in the consumer realm had apparently 3D printed anything with this many lines of code before and it kept losing count) and even filament before we got things to calm down and print perfectly.

And now Steve has made another half dozen of these monsters.

The Gigante 3D printer still acts up sometimes – it’s kind of like having a 3-year-old – and we are constantly upgrading it, but we’ve come a long way. In fact, I’ll have 2 posts soon about replacing the extruder.

But first, the fun stuff: seeing this giant 3D printer run in person!

You’ll also get to see some incredible art, including some of the giant prints I’ve made with the Gigante as well as the provocative, fantastical mixed media work of Jill Friedberg, which has been featured twice in the Arizona Biennial, and the eclectic and eccentric ceramics of Rob Snyder.

For those of you who have your own 3D printers, I’m glad to get down and dirty with your more in-depth questions and comments, but for anyone who hasn’t seen a 3D printer running, this is your big chance.

Mark your calendar for Saturday and Sunday, November 13 – 14. For information about the location, visit the Website Events section or contact me.

There are 9 studios on this tour (including another one in my neighborhood!), so if you’d like more information about them and a free map, visit Camelback Studio Tour‘s Website.