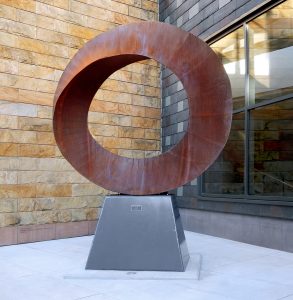 Some of Kevin Caron’s jewelry forms began as relatively tiny versions of his much larger steel sculptures.

Among those sculptures whose forms translated to a much smaller scale, are Mobius, BackFlip and Wherever You Go, There You Are (left, in front of Whitaker Center for Science and the Arts in Harrisburg, Pennsylvania). 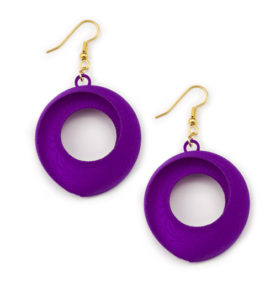 Kevin began developing new designs as he explored the mechanical, geometric and delicate forms made possible with CAD software, which he also uses to create his innovative sculptures.

“3D printing is a surprisingly organic process – it is a great tool for releasing my artistic impulses and expanding my artistic methods and fabrication skills,” says Kevin.

“It also allows me to create designs that are difficult or impossible in metal. With jewelry, it also broadened the size range for my creations,” he explains. “Now suddenly I can create in a scale smaller than my finger.” 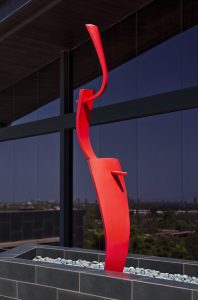 Previously, Kevin worked in large scale – a number of his sculptures are more than 10 feet tall. 3D printing has allowed him to work in a very small scale, and to finally create a jewelry line.

He has always loved jewelry: its proportion; its proximity and relationship with the body; its color, the shadows it casts; and, in the case of metals, its reflection. 3D printing opened the door for him to manifest these small, delicate sculptures as wearable art.

Some of his jewelry designs actually originated as sculptures. He initially designed BackFlip (right) for a 12,000 square foot residence on the side of Camelback Mountain in Phoenix, where this 7-foot-tall sculpture still stands. “I knew the design would make beautiful earrings,” says Kevin.

Mobius also began as a kinetic sculpture, which is at a private residence in Paradise Valley, Arizona.

Torus is a version of a design he created as a full-size sculpture in the forms of Torrent, Crimson Singularity and Wherever You Go, There You Are, which is 9 feet tall.

Campfire and Sand Dollar have yet to be created as anything but earrings, but he would like someday to fabricate each of these in a monumental size.