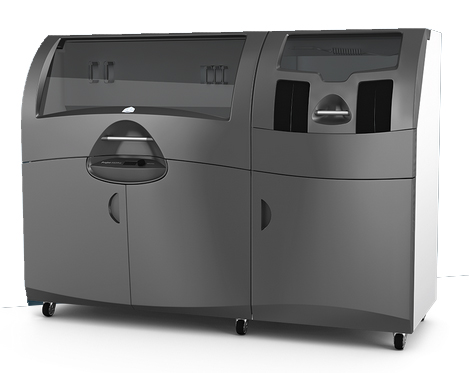 One of the strongest intersections of art and 3D printing is taking place right here in Phoenix at Arizona State University.

I first encountered Dan Collins, who is a professor of Intermedia in the School of Art as ASU and a co-director of the PRISM lab, an interdisciplinary 3D modeling and rapid prototyping facility.

Dan has been involved in 3D printing for a long time. He was involved with TeleSculpture, which was held in 1999, 2000, 2001, 2003, 2005 and 2007, in which artists would simply send in their designs, which would be printed remotely for the show, an incredibly innovative idea, one certainly ahead of its time.

(You can read more about Dan’s activities and involvement by clicking on his name above.)

What Dan and his team have done is amazing …. 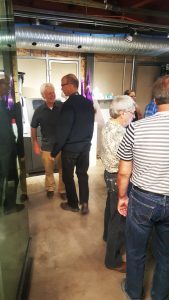 As long as he has been involved in 3D printing, Dan continues to be curious and inclusive. He asked me to participate in an all-day workshop when the International Sculpture Center had its international conference here in the Valley two years ago, and also invited me to show some of my large format 3D printed sculptures in 3D Visualization and Prototyping Exhibition (right) on April 21 when they launched the PRISM lab.  Dan even came by my show “Two Worlds,” which I held last November, to see my 8-foot-tall Cerberus 3D Gigante 3D printer in action – more on that in a moment.

Visitors were able to not only see 3D-printed art, methods and even medical applications. Best of all, attendees could see the lab and the incredible machines the students have at their fingertips. Yes, I’d love to be able to run some of them myself! Among them are 3D Systems ProJet 660, which prints in full color; the 3D Systems 3DS 3510, that can print up to 15 different types of UV curable filament; and the Zortrax M200, which can print in ABS, HIPS and, if I’m reading this right, glass.

They also have a Polar 3D on order, and, yes, a Gigante.

I’m pleased to have connected Dan and his right hand guy, Andrew Noble, to Steve Graber of Cerberus 3D. Steve is building the latest version of Gigante for ASU, which also has ArtecEva and NextEngine HD 3D scanners.

ASU’s commitment to the marriage of technology and art is impressive. Now the largest U.S. university by enrollment on its Arizona campus, ASU has become an innovation leader. Its president, Michael Crow, transformed a sleepy party school into a leader in innumerable fields. So when Crow toured the School of Art and asked, “Where are the 3D printers?” it became apparent that the school had support from the top to invest in 3D printing technology. And, as you have seen, they have and are.

It’s exciting to have such energy and investment this close to home. I can’t wait to see what the people at the ASU School of Art do next. And because Dan Collins understands and embraces collaboration with the community, I suspect I will get to know what exciting initiatives they embrace next.