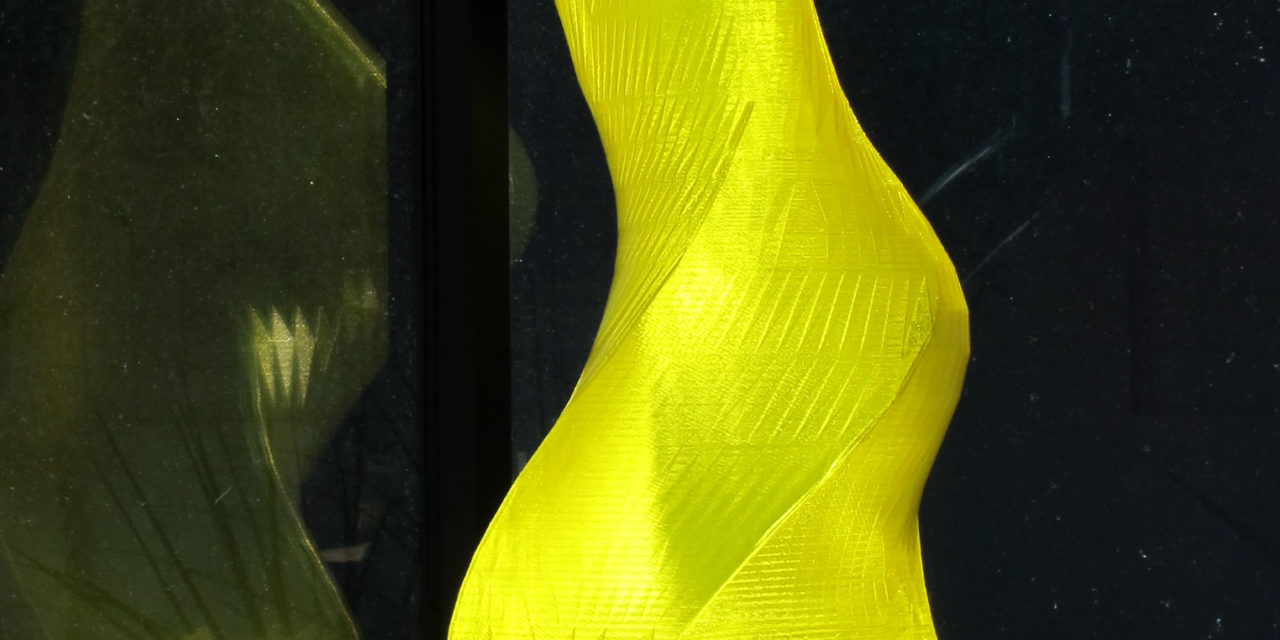 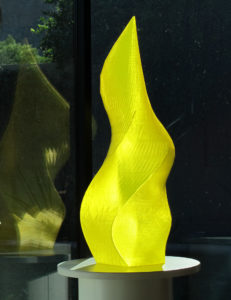 Working with my 3D-printed sculptures requires a balance of aesthetic and technical considerations. In the big picture, that’s not all that unlike working with metal, but the way I do it is definitely different in each medium.

As usual, I began playing with forms in CAD, this time in Rhino. It took a couple of tries to get it to print properly – there were some hiccups with adherence to the print tray (I really need to clean it better before trying to print!) – but it was a pretty painless 3D print, and boy, do I love this yellow translucent filament!

With the print came a couple of surprises, as is so often true. One surprise was great, one less than great – more on both of these in a moment.

So clearly, I need to make some tweaks to the design…

The happy accident is the result, apparently, of low screen resolution set in Rhino. That gave the sculpture an incredible surface texture, somewhat crazed, and fascinating to see and touch.

The other surprise is one that makes me glad that 3D printing allows me to tweak a design and reprint it so easily (everything being relative, of course). 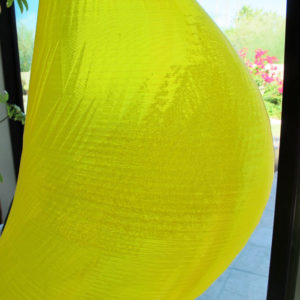 One of the challenges of 3D printing is the desire to avoid supports, which are required when a design has too much overhang. When the angle is more than 80 degrees, the program realizes that the filament will not cool quickly enough to maintain its shape and builds in supports, which must then be removed after printing is complete.

That often leaves ugly marks, no matter how carefully I try to shave them off. So one of my challenges is to create designs that don’t require supports. (Oh, for a printer than can make wax supports, like Shapeways has!)

As the closeup at right shows, one area in this otherwise shimmering sculpture hung over just a little too much. Rather than exterior supports, however, the program chose to simply print a couple of layers internally in one area to support the angle.

The look isn’t horrible, but I’d just as soon have the same luminosity over the entire sculpture.

So not long after Daisy Mae  cooled, I went back into Rhino and changed that angle slightly, tweaking the design a bit here and there while I was at it.

Now I can’t wait for the next opportunity to print this new version!