Chaos reality: 3D printer has a mind of its own 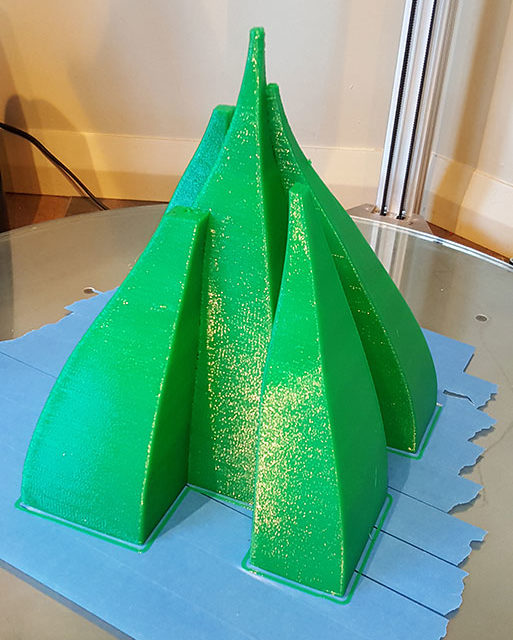 Score 0%Score 0%
Working with 3D printing in this “Model T” period means dealing with all sorts of surprises. All of them are probably maddeningly logical – these printers are run by computers, after all – but sometimes it’s hard to figure out why.

That was the case with a recent 3D printed sculpture I’m calling Cuddle (my wife keeps calling it Huddle – go figure).

Although the final print came out beautifully (except for the color, but that’s another story!), my Cerberus 3D Gigante 3D printer decided to get there in a mighty odd way ….

Admittedly, these prints are big. This particular one, although it’s far from as large as several I’ve done, is also complex. I had tried to print it three times before I reduced it in size and resliced it again. This time the sculpture finished printing, not even threatening to lift off the print tray, a problem I have with these large prints.

But as it printed, I noticed that the printhead was tracking really bizarrely. The head wouldn’t go around each “tower.” It didn’t go around the exterior of the entire sculpture and work its way in, either. It just seemed to hop from one area to another what appeared to be randomly. 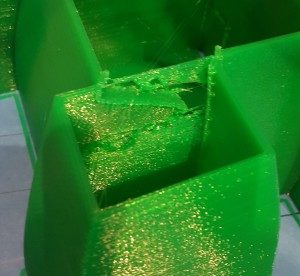 Of course, it wasn’t random – it’s a computer! – but it sure looked that way. Steve Graber, my 3D printing guru and the genius who built the Gigante and its little cousin the Cerberus 3D 250, even commented on the printhead’s chaotic path. Most of what it created, however, looked fine.

What was particularly strange, though, was the voids it created both in the bottom of the piece (below, right) and – thank goodness – on certain interior walls (left).

I’d learned from my experience with Sunscraper, the big yellow sculpture that I talked about in my last post, that I wanted to be very careful with interior walls after Kisslicer, the slicing program I use, decided to just eliminate them where they overlapped in the design. So this time I made sure that the walls didn’t touch but only butted up to each other.

Still, the program decided to leave really odd openings on either side of the walls on the bottom of the sculpture for no apparent reason. Fortunately, it has not seemed to jeopardize the sculpture’s structural integrity. 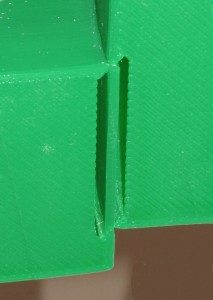 The “windows” it made in the interior walls were a little more concerning, but ended up not making a difference in the print structurally or aesthetically because no one can see them.

Interestingly enough, the printhead would come up one side of the window, turn around and go back, then come up the other side and turn around. So it wasn’t jumping the space, although it did eventually “heal” the wall over them.

What caused these aberrations? I don’t know if I’ll ever know, but I’ll continue to try to find ways around them.

Summary Chaos reality: 3D printer has a mind of its own free blog post about 3D printing - Kevin Caron