Baby gets a new pair of shoes 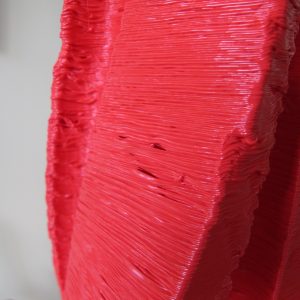 I use my 8-foot-tall Cerberus 3D Gigante 3D printer a lot. I’ve probably printed 100 sculptures on it, and that doesn’t include failed prints, which would multiply that number several times over.

Accordingly, things wear out. (Technology is always improving, too, but that’s another story.)

If you’re a regular reader, you’ve probably read about several adventures replacing parts – I’ve pretty much replaced everything on this printer in the years I’ve owned it.

A couple of weeks ago, I was printing a new large sculpture (right) on the Gigante, and the results were … well, we could say “different,” “interesting,” “organic” or just plain “ugly.” I’m going with “ugly” although I may try to play with it to see if I can transform it in a way that saves it aesthetically.

At the time, though, I knew something was wrong.

Indeed, I had worn out the extruder feed wheel (the extruder is the mechanism that feeds the filament down into the hotend).

This was the third or fourth extruder I’ve replaced, the others because of improved technology. This time, though, the feed wheel was just worn out and the extruder motor was showing some wear. This gave me a chance to upgrade to a new, more powerful extruder.

The old extruder was only about 3 years old, but because the technology changes so much, I wasn’t heartbroken to change it, especially because this new extruder will also give me a little more print room, letting me increase the size of my 3D prints about 100 mm.

Of course, changing it wasn’t as simple as switching out the extruder ….

The new one is a BondTech QR 2.85/3.0, and it mounts a little differently. I was able to create a new aluminum mount – my metalworking skills and equipment come in handy even with 3D printing! I had to also modify the fan mount, too, so this whole operation took a couple of weeks, in part because I needed to enlist Steve Graber, the mastermind behind Cerberus 3D.

Steve has come by twice now to help me recalibrate the settings. We’ve shot some cool video we’ll be sharing soon with the 2 of us working on the Gigante.

Meanwhile, I have a new print running right now that looks like it’s supposed to – what a great feeling!