What a tangled 3D printing filament spool we weave …

I was SO excited when I found a source for 15-pound spools of 3D printing filament! 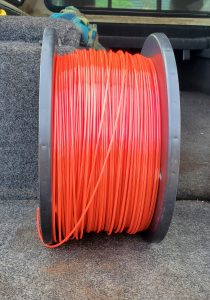 It was just what I needed to feed my voracious 8-foot-tall Cerberus 3D Gigante 3D printer. Some of its prints take 4 – 5 days to complete, which meant more getting up in the middle of the night to change spools than I like to admit.

I ordered a half dozen of the 15-pound spools, including some PLA and some PETG.

So when it was time to do a big print for a special art professional who was coming to see my studio and work, I was excited to try some of the new translucent PLA.

The first attempt failed – the extrusion width was inexplicably wrong (it WAS right – I have no idea how it got changed).

The color was a little florescent for what I had in mind, though, so I took the opportunity to switch to a red PLA filament.

I hadn’t gotten more than 1 layer of the base printed when the filament jerked and came to a halt. It didn’t take long to see why. If the filament on the spool isn’t carefully wound, the layers can overlap and catch. That’s just what happened in this case.

I took off the spool and headed out to the length counter I’d jigged up – sometimes I use it to respool for just this sort of situation.

Respooling 15 pounds of filament by transferring it to an empty spool wouldn’t be easy, but after doing it with 5 pound spools, I knew it would work. 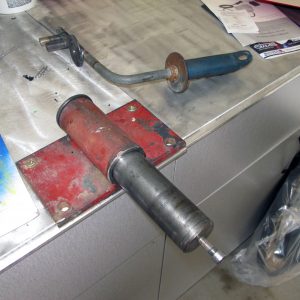 Except, in keeping with the Rule of Unintended Consequences, my FCD (Fiendishly Clever Device) couldn’t handle the larger spools. Drat!

I threw a 15-pound spool of luscious translucent yellow PLA onto the Gigante for this print and took the other 2 large spools to the studio, where I’ll just have to cook up a new way to transfer the tangled filament to an empty spool ….