3D printing, or 3DP as some would like to call it, has become the go-to method for prototyping. 3D-printed protypes are inexpensive and easy to produce compared to those made with plastic and other material, but the application of 3D printing has been largely restricted to building mock-ups because of the brittleness of the material. Is there a possibility to address this issue and adopt 3DP for mass production?

As the interest in 3D printing technology continues to surge, we are more and more exploring the possibilities to implement it manufacturing the final product. To do so, we need to find a way to assemble 3D printed parts just as we do injection-molded components. It turns out welding is a feasible option for 3DP assembly.

The 3D metal printed surfaces are susceptible to cracking because of their poor atomic bond.  These microscopic gaps between the atoms create large bubbles after being welded, which is known as porosity, and compromises the durability to a substantial degree. If we want to achieve a sturdier result, we must figure out a way around this problem.

One way to bring down porosity in 3D printed metal could be good old-fashioned electron beam and laser welding technology. Laser welding machines have been around for more than half a century, but they never caught on because of the associated high cost. The lack of flexibility is also another reason for its industry exile, but in this case, laser beam welding proves useful.

Precision and penetration are the strong suits of laser welding. It’s immensely powerful with deep penetration capabilities. Whether it’s carbon steel, titanium, aluminum or any other metal, it welds them with minimum deformities. The beam is easier to control and has a very small impact zone to avoid annealing of the surrounding material, which, in turn, allows for more meticulous welding of parts….

All these attributes make laser welding perfect for welding 3D printed materials. The prime advantage of using laser welders is they can be controlled pretty accurately. The beam reaches deep toward the core and generates enough energy to seal off the inter-molecular voids and eliminate porosity in the process.

Sweeney, who went on to open his own company Essentium Inc., attempted to expand the usability of 3D-printed oriented materials as he realized 3D printing holds great potential in pioneering the field of additive manufacturing. So he and his supervisor Dr. Green attempted to exploit conventional welding techniques with a few tweaks.

They came up with an idea to infuse carbon nanotubes into the 3D-printed components to make the overall structure more resilient to oven temperatures.

Because of the plastic construction, you can’t just expose it to the high temperatures of an oven as it will melt. But both Sweeney and Dr. Green felt the need to use the traditional welding method for overcoming the porosity problem.

3D-printed objects are basically an amalgamation of countless plastic fibers. These pile on top of one another and take the form of different real-life materials. This leaves huge space in the overall structure at its atomic level, which is ultimately responsible for the fragility 3DP objects exhibit. 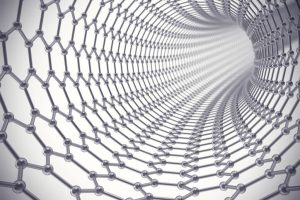 Accordingly, they decided to selectively reinforce the materials with carbon nanotubes, meaning they inserted these filaments into some target areas instead of the whole surface. There was no need to melt the complete part – they just needed to apply heat at junction points where they would fuse one piece with another one.

Sweeney and Dr. Richard took some of these tiny strands that make up the 3DP material and coated them with carbon nanotube composites. When the components print out, these composites occupy the gap between the tiny plastic layers and give them a more robust build. Then they put the parts into a microwave oven for welding.

This line of thinking was inspired by Dr. Green’s participation in another study with a faculty member of Texas Tech University. Dr. Mohammed Saed, who is an associate professor in the Department of Electrical and Computer Engineering at TTU, and Dr. Green had previously used microwave to identify carbon nanotubes in the said experiment.

We can also take the ultrasound welding route in some cases for welding 3D-printed parts. Ultrasound wouldn’t have been a viable welding option for 3DP parts a few years back, but recent advancements in 3D technology have changed that drastically.

For ultrasound welding, you would need a sonotrode, which is also known as a horn. Sonotrodes emit high-frequency vibrations directed at the intermolecular void between multiple layers. This produces heat, which melts part of the layers and fills the gaps in between. Even though it’s mostly used for thermoplastic materials, ultrasound welding can be quite effective for 3D-printed parts as well.

3D printing has already had a significant impact across a variety of industries. The use of the technology in prototype building has been a massive success, but in the coming years, we might see 3D printing becoming mainstream for manufacturing final goods as well.

Over the past few years, we have discovered some effective welding techniques that have made 3D-printed materials more stable and that has given us the chance to contemplate more practical applications for 3D printing technology.

Weldsmartly Founder and Chief Editor Gary Hargrave grew up watching his father, a professional welder. With a degree in Welding Technology degree from Maxville College as well as on-the-job experience, Gary founded http://www.weldsmartly to enlighten and help train the thousands of potential welders out there on the nitty-gritties of the job. In this industry, he believes passion is everything.