Back to the future: up and running 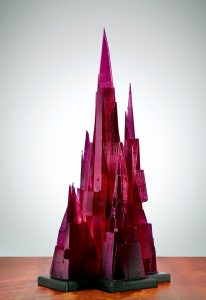 The last six weeks have been a whirlwind. That’s part of my life as a sculptor, especially at this time of year.

I attended the Codasummit in El Paso, Texas, in early October, sharing more information about my work with large-scale 3D printing, then geared up for the 2019 Camelback Studio Tour, for which I really needed to have my 8-foot-tall Cerberus 3D Gigante running.

The 6 weeks the Gigante was down just prior to that was a bit heart-stopping.

My backup plan was to bring out my Cerberus 3D 400 and have it running during the 3 days of the show, but it wouldn’t have been the optimum. I was on TV a lot (Channels 3, 5, 7 and 10 here in metro Phoenix) to promote the show, and the 400 just doesn’t have the visual impact of the Gigante! That proved true as a number of visitors came just to see it running.

I printed 3 sculptures during the show, one each day. Two made the cut, while one had a weak start – the filament drooped unattractively – so it didn’t survive, but the other 2, Solar Conundrum, a translucent yellow of my solid style, and Amethyst City (right, in a temporary photo), a spectacular new piece in my new “cubist” style, came out beautifully. 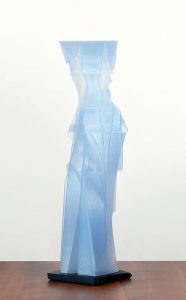 The Camelback Studio Tour was a great way to get feedback on this new deconstructed “cubist” style. I was pleased at the reception the new sculptures received, especially from more sophisticated art aficionados, who were fascinated by the complexity of this new approach. Ice Princess (right), in particular, garnered kind comments. For some this new style is clearly too “messy,” but others really “get” it. BTW, I’m still investigating this approach – there are a number of options, as evidenced by sculptures such as Ice Princess, Rose She and The Graduate.

I was also gratified by their reception from the owner of my new gallery in Santa Fe, New Mexico, a renowned art destination. I drove up there November 20 to take quite a few of my sculptures there. Mike McKosky of InArt Gallery Santa Fe appreciated all the work I brought him and was clearly fascinated by the new style, in which I use technology to create a distinctively organic look.

Now that I’m back in town for a while, I look forward to playing with the Gigante with its new hotend, which will let me work with more exotic filaments like the Silky Rainbow I was able to use on the 400.

I’m confident that the Gigante will behave for a while, knowing, too, that Steve Graber is ready, willing and able to address anything that should happen ….