A tale of two 3D-printed sculptures 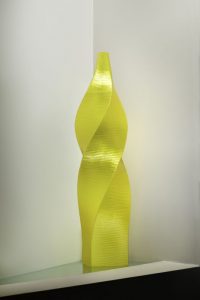 That being said, I do enjoy creating variations of sculptures – something I also do with my metal works – which is how series develop. (If you go to my Website, you’ll see how I have multiple sculptures in the same vein, which are organized as series, in both my Fine Art and Home & Garden categories.)

Sometimes series develop because, as I create one sculpture, I can’t help thinking, “I wonder what would happen if I … ” took a different approach than the one I am already committed to on the piece I’m currently making.

Other times, someone will say something and spark an idea, and I can’t wait to see if it will work in a new sculpture. (A good example of this is Adzuki, a 3D-printed sculpture with a light inside. I’ll do more with lights, too – it’s the single most asked question about my large format 3D printed sculptures: “Can you put a light in it?”)

Recently I 3D printed a piece on my 8-foot-tall Cerberus 3D Gigante 3D printer for a visiting TV crew and decided I wanted to make a variation on this design using the same luscious filament  …. 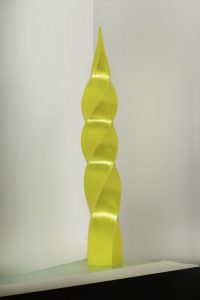 I ran the first 3D print – which became the sculpture Lemon Pisa (shown at the top of this post) – fast because I wanted the crew to see a print from start to finish. It took 12 hours to print, which is relatively fast for a 31″ tall sculpture, but it helped that it was only one perimeter layer thick. (In case you are wondering, the title refers to the sculpture’s slight tilt. It is intentional.)

When it finished, I thought it was OK, but it instantly suggested a better variation. (It didn’t help that the wide top didn’t finish well. It’s probably because of that thin exterior layer, but I’ll “fix it in post” using my 3Doodler and some of that beautiful transparent yellow filament.)

I went back to the CAD program Rhino, which I’d made Lemon Pisa in. I narrowed the base from 8″ to 6″, added another twist and stretched the top to a smaller point. The second sculpture, titled Lemon Twist, is also – intentionally – straighter and taller at 36″. I slowed down the print, too, at times as slow as 50%. It took 25 hours to print.

Although the changes were slight in Rhino, even I was surprised at the dramatically different result.

It just shows how a small tweak here and there can result in real changes. If I’d used a different filament, I’m sure it would have been even more dramatic, but I sure love that yellow transparent!