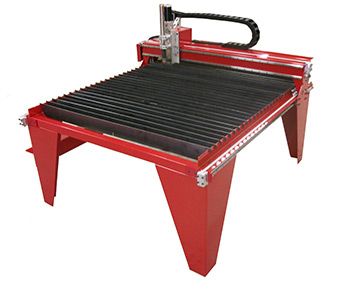 Since I became a full-time artist in 2006, I’ve purchased and used a lot of tools. A lot of tools. If you took the recent video tour of my studio, you see many of them, and yes, I use them all. Using the right tool for the job can mean the difference between a job well done and one that turns out just OK, and the difference between spending hours and committing days to a single task.

Recently, I “moved up” in the world of metal working with a purchase of a Dynatorch Super B 4×4 Plasma CNC table (right). This tool allows me do jobs in an hour that would have taken me days, and does them better. It cuts out the metal accurately and cleanly – no more cutting close, then trimming or grinding to size!

The CNC table is a game changer for me, much like my 3D printers have been.

Interestingly enough, my experience with 3D printing helped me get up to speed on the Super B a lot faster than I would have otherwise ….

At first, the number of components – the CNC table itself, the computer, the Hypertherm Powermax 85 plasma cutter, a million cables – and all the steps required to use the table were overwhelming. I wondered if I’d ever learn how to use the darn thing. 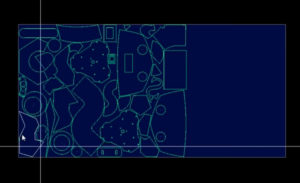 As I began scouring the books, looking at videos, untangling parts and pieces, though, I realized that a lot of what I was encountering was actually a crossover from 3D printing.

For instance, I start by creating in CAD the shape of whatever I want to cut out. Instead of saving the file as an .STL, though, I save it in .DXF format. When I used to have to send out for waterjet cutting – those days are probably over! – that’s the format they wanted, too.

Then I send the file through a program called SheetCam, which is used for milling, routing, plasma, waterjet, laser and oxy-fuel cutting. SheetCam converts the file so the table can see it, much like I use KISSlicer to slice files for 3D printing. In this case, SheetCam isn’t slicing, but it is preparing the file in whatever magical way it needs. Interestingly enough, it uses GCode, as does my 3D printer.

Just like with 3D printing, I then send that file to a host program, in this case, the Dynatorch program that is on the desktop computer that comes with the table and sits right by it so I can make adjustments – just like a 3D-printing host program! – while the cut is under way.

Of course, there are other big differences, including the fact that the table works in 2D rather than 3D and it cuts out rather than building up (subtractive vs. additive!). What I do know is that my experiences with 3D printing gave me a huge leg up with the Super B.