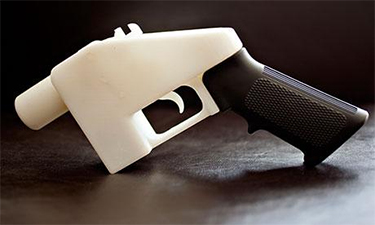 One of the aspects of being on the leading edge – or as I like to refer to it, the bleeding edge – of a huge movement is watching what you did become history.

That is certainly true about 3D printing.

As important and world-changing as the Internet has been, 3D printing may exceed the Internet’s importance because of the number of industries it has infiltrated.

Part of that has been because the concept of 3D printing – building a three-dimensional object by simply “stacking” 2 dimensional layers on top of one another – has implications for medical, scientific, fashion and other fields as well as art.

We’ve all heard about the gun that was 3D printed, but most people didn’t get beyond the fact that a 3D-printed gun isn’t really practical. (Besides, I’m really tired of hearing about that damn gun!)

Yes, people are already 3D printing in metal, biomaterials and other specialty filaments – heck, even I have printed in bronze – but we seem to have moved into a new era ….

I realized this when I got an email from MakerShaper, a North Carolina based 3D-printer filament company, to let us know that they now have a 3D-printing Filament Comparison Guide. 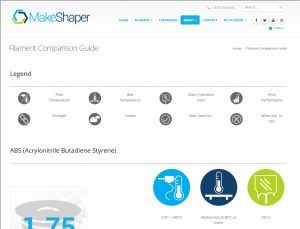 We’re not talking about bronze, copper, steel or wood (well, sorta wood), as I’ve written about before. This guide tells you more about different “non-exotic” types of filament like PLA and ABS, which most of us print in. (I’d love to print in 100% bronze, for instance, but the 80%Â  bronze / 20% PLA works for me now.)

Yes, now that 3D printing is become more and more mainstream, people need filaments that are flexible, drop resistant, food safe, heat resistant and that have other special qualities. And now they can have them.

Considering the speed with which this industry is developing, this is surely only the beginning. I can’t wait to see what else is over the horizon.

Maybe I will be able to 3D print that key lime pie with chocolate graham cracker crust sooner than I’d hoped ….