The Strange Case of the 3D printed Geared Ball 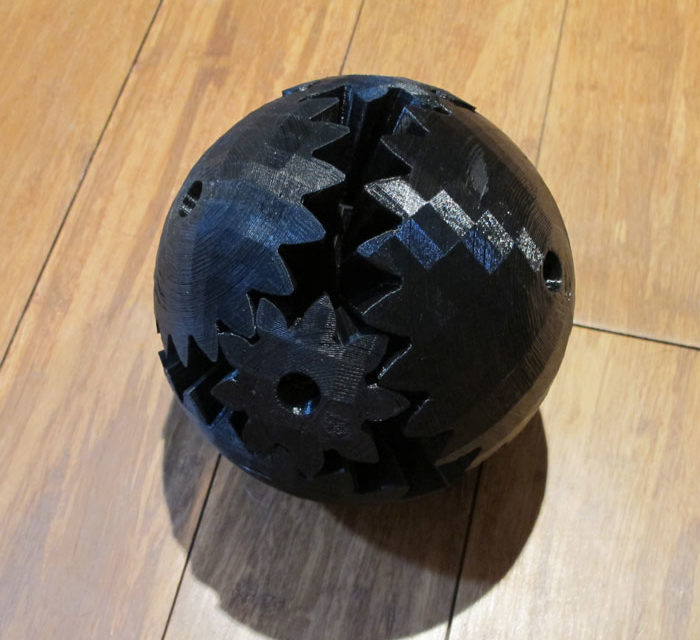 If you read my last blog post, you know I’ve been playing around with some cool designs from Thingiverse.

Both are geared – one is a cube, the other a ball. You can see me playing with them in that last blog post – several people have remarked they are like a modern Rubik’s Cube. I’ve taken a geared cube to events and people just can’t stop handling it.

Lately, I’ve been having fun enlarging the designs to print on my 8-foot-tall Cerberus 3D Gigante 3D printer, something that was a whole lot harder than I thought it would be – it isn’t just a matter of scaling up mathematically.

I’ve also been adding stripes to cubes while printing (another good reason to check out last week’s post to see me manipulate one).

But the point of this post is the strange thing I discovered after I printed the large black geared ball (right) ….

When you 3D print a geared cube, you print all the pieces at the same time. With the geared balls, you print all nine pieces – four large ones, four small ones and a middle – separately. 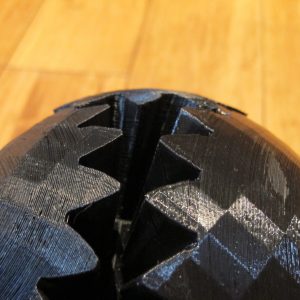 Using my 3D Systems CubeX 3D printer, I had printed six of the pieces in black ABS filament for this 5″ geared ball when I realized I wasn’t going to have enough to print the last three pieces.

So I found some black 1.71 mm PLA filament, which is what the CubeX runs, and figured, “What the hell – filament is filament.”

After the last three pieces printed, I bought some 1/4 x 20 Allen bolts to assemble it, just as I’d done with a 2-1/2″ gray version I’d printed earlier.

Finally, I realized that the three pieces I printed in PLA were slightly larger – the photo at right shows one of the smaller pieces protruding slightly.

I’d heard that PLA filaments shrinks less, and this seems to prove it.

I want to try playing with this some more, comparing PLA to ABS, but since I finally got the black geared ball together, I’m happy for now.