You win some …. heartbreaking 3D-printing fail 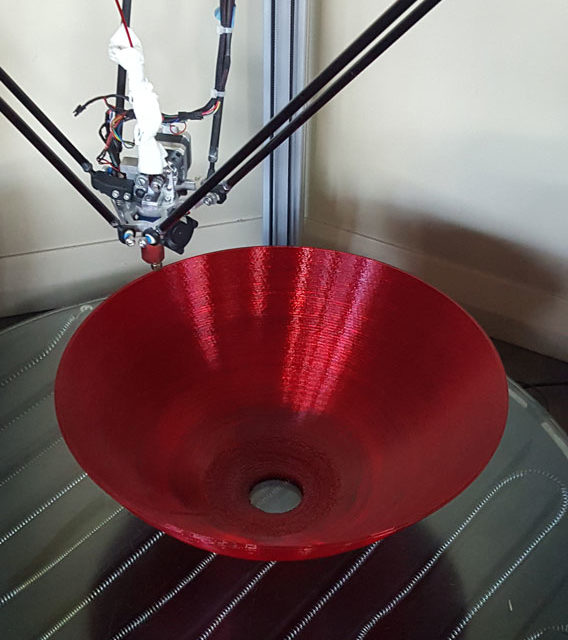 My printers have been running well recently, for which I’m grateful. In fact, I had a really big print running on my Cerberus 3D Gigante (my 8-foot-tall 3D printer) recently.

I was more than two days in to what was going to be a beautiful new sculpture, and the piece looked flawless – well, except for the single, straight seam that wasn’t supposed to show, but that didn’t bother me because the rest of the 3D print looked magnificent without any boogers, weird seams or other unplanned aberrations.

Yes, all was well in the land of 3D printing here at Kevin Caron Studios. THIS is how 3D printing should be! I had been able to just monitor the print, changing out filament once, and all was going swimmingly.

And then unexpected disaster struck ….

This time it wasn’t the printer’s fault, though.

The very small base on this large print was sticking beautifully – that heated bed I had added has been working like a champ. 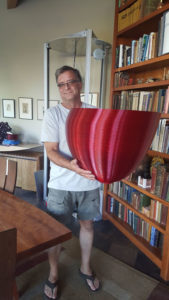 As I mentioned, the finish was great.

I had enough of the beautiful 3 millimeter red transparent filament to finish – or at least thought I did, and besides, I’d reordered some, just in case, and it was on its way.

What I didn’t anticipate – and really, who could have – was the freak power outage.

Yes, in the middle of a quiet Saturday late afternoon, we suddenly had a rogue thunderstorm in Phoenix. We have some awesome thunderstorms here, usually in the summer during monsoon season, but this one really came out of the blue. And speaking of another kind of “blue,” it blew out our electricity. Now I was blue!

Yeah, I know, you’re thinking, “What?! You didn’t have a backup power supply?! What the hell were you thinking?!”

Well, I did have one, but it was only good for 20 minutes, and this blackout lasted more than an hour. Arghhhh! The print was screwed, and so was I. There was no use yelling, screaming and breaking things. It was over.

So I did the only two things I could do: start looking for a better power solution and figure out what in the hell to do with this cool half of a sculpture.

For the first part, I went to my local electronics store and sussed out some new backup power supplies. I’m planning on getting two of them, one for my computer and one for the printer and fan. If the electricity goes out, I’ll let the heated bed go – it sucks power like you wouldn’t believe. But the unit I’m looking at will last for 164 minutes. If the power is out more than that, I’ll have other problems to worry about ….

For the second challenge, I turned to Facebook and asked my peeps what they thought I should do with it. This isn’t some small piece, BTW. Even just a little more than half printed, it’s 18″ tall and 19″ in diameter.

One thought it’d make a good umbrella, another suggested a funnel or a megaphone.

A couple of people suggested that, with some embellishment, it’d make a beautiful flower.

Others thought it’d make a nice hat (and they don’t even know I have a big head. I mean literally, my head is big).

I liked the idea of a modern cornucopia, too.

Other ideas included a fountain and putting a stem on it to make a giant wineglass, another idea that appealed to me.

After some discussion with my business manager, I’m now working on a base for it, then will have a frosted glass top made to create … an end table (yes, it’s that big). It may not be a sculpture, but I think it will at least be something beautiful.

And now that a series of storms have blown through and after I get those power backups, my stomach is just about settled enough to try to create that sculpture again ….