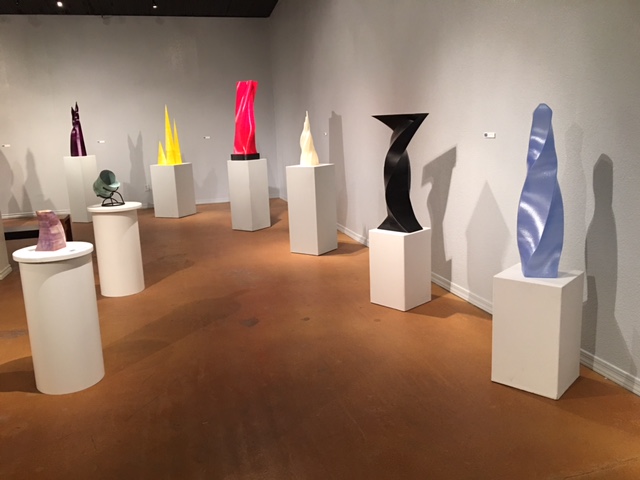 I’ve had my 3D printed sculpture in a number of shows, but thus far it’s either been in an exhibit with other people’s 3D printed work, like the Shemer Art Center 2014 show “Materialize,” or as just pieces in an art show, like last year’s  show at MonOrchid, “Ten Modern Abstract.”

Finally, it was time for a show dedicated to my 3D printed sculpture.

I’m deeply fortunate that I was approached by Robrt Pela, the highly talented curator, writer and critic to do a show – well, actually two shows, but that’s another story altogether.

This one, called “Endless Line,” would feature the largest single exhibition of my large and small format 3D printed sculpture, really putting my work out there for comment and criticism ….

For the 3D printed sculpture show, Robrt chose the Walter Art Gallery, which is part of Walter Productions, a maker space that features, among other things, a brewery, artist studios and the gallery. Most famously, it’s the home of Walter the Bus, which many people know from the Burning Man festival.

Displaying and lighting these sculptures was a real challenge. First, most of them are in a single, saturated color. That meant they had to be placed carefully so that each sculpture complemented the others. Fortunately, they had enough space to place each sculpture so it could be circumnavigated. That is invaluable with any sculpture. Lighting was tricky because some of the sculptures are printed in translucent filament, like the luminous Sunscraper, which had actually sold before the show even began. 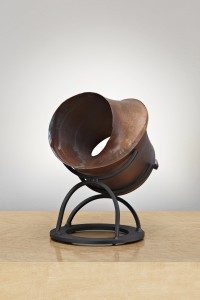 Some of the sculptures, including Glance and Copper Cuff (right), have patinas on them, but the majority have the shiny surface of filament, which made it challenging to not just reflect a glare from them. Lighting master Todd Grossman finally settled on making the light work best at night when the opening and closing receptions were held.

I brought my Cerberus 3D 250 deltabot 3D printer and set it up to print a small sculpture. We had my jewelry set up for sale, too.

Everything was ready by the time of the opening on Friday, February 5. Our hosts were even nice enough to bring Walter the Bus out and turn on his undulating neon lights to welcome visitors.

And come they did.

It was fascinating to watch people, listen to their comments and answer their questions. Many of them didn’t yet understand how 3D printing even works when they came in the door. After explaining the process to hundreds of people over the last few years, I think I was able to explain it to them in such a way that most of them got it before they left.

Others were fascinated by the filament. I overheard someone flicking Sunscraper with her nails. I only cringed a little.

Some preferred the patinated pieces. No one, at least that I heard, was turned off by what they saw or denied this was art. In fact, most of them were blown away, which felt great. I also overhead conversations about 3D printing in general – what people are already doing and what the future may bring.

I think I gained some new fans with this show, and I know we educated a lot of people. I came away more confident than ever that people understand that 3D printing may be new and, for now, novel, but that it’s simply another tool in artists’ quivers.

The closing reception for the show is Friday, February 26 at 6 p.m. at the Walter Art Gallery, 6425 E. Thomas Rd. in Scottsdale, Arizona.