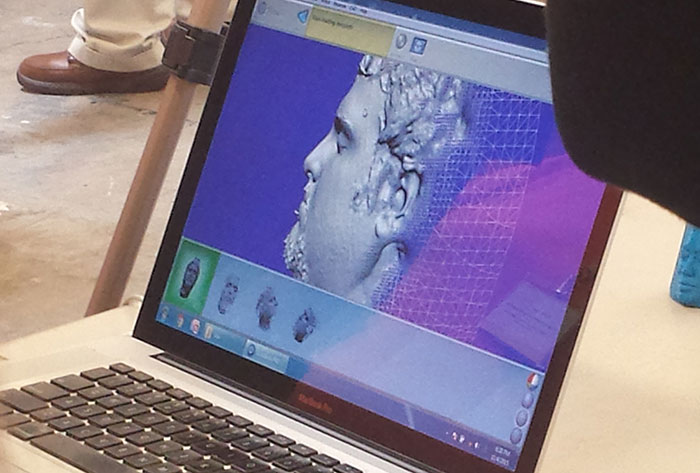 One of the sessions I signed up for right away was “3D Body Scanning and Prototyping Workshop.” It was to be held at Arizona State University, one of the largest universities in the United States, which is in Tempe, part of the metro Phoenix area. The workshop was organized by Dan Collins, a professor and longtime 3D printing enthusiast whom I first met last year through the Shemer Art Center 3D printed art show “Materialize.”

I didn’t know much about body scanning, but I thought it would be an interesting adjunct to my work with 3D printing. Little did I know that Dan would ask me to be part of the session ….

So on an unusually drizzly November 4 in Phoenix, 30 of us gathered in ASU’s Art Warehouse to learn and share about body scanning. 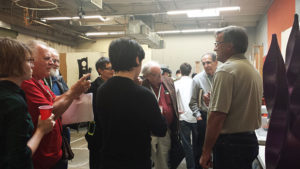 I may have been there for comic relief, but a lot of the sculptors who had indeed come from all over the country as well as Canada were curious about what I’m doing.

It helped that I brought a lot of show and tell. I had a couple of my large format 3D printed sculptures, some smaller sculptures including Oculum, a sculpture I had printed in ABS and then patinated – sculptors get patination – as well as a version of that same form I had printed in PLA and just pried off the printer that morning to show them how it looked right after printing.

I also had a 3D printed version of my sculpture She I had created five feet tall in steel – I had a photo of the sculpture in steel so they could compare them.

I brought my Cerberus 250 3D printer, too, which I ran during the event. 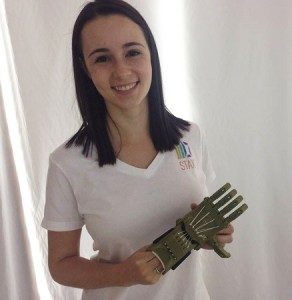 I enjoyed talking to the attending artists, some of whom had no experience at all with 3D printing or any of this sort of technology, as well as some sculptors who were working with it already. Really impressive was a group from Wichita State University, who taught me a few things about the “lost PLA” process, which I’m eager to try.

There were several other companies there with 3D printers, including Stax, which had a 3D printed prosthetic hand.

They also had a Form 1+ 3D printer that uses a totally different technology, SLA (Stereolithography Apparatus) printing, to  print a working magnifying glass with this amazing printer! 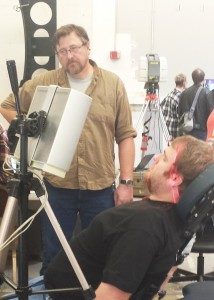 But the main event was definitely scanning. The folks from NextEngine were there, scanning participants’ faces, then showing how to repair the files for printing (as shown above). Their amazing scanner is just under $3,000.

There were also three homemade body scanners that anyone can build for under $500 – how cool is that! They scanned people as they stood on a rotating gear and the scanner moved up and down on a simple tower.

There were lectures, of course, too, and lots of discussion – many of the attendees were professors as well as artists.

I came away still unsure how scanning would fit into my artistic practice, but with a whole new way of looking at how these technologies complement each other ….