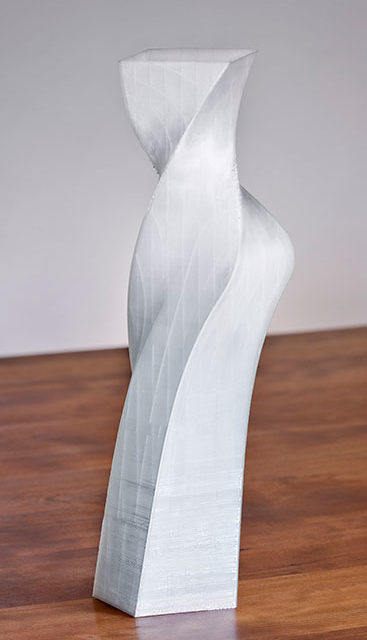 I’m a sculptor by trade.  For years, I’ve been making sculptures in metal, mostly steel, but also occasionally aluminum, copper or brass.

For the last half-dozen years, I’ve used CAD (Computer Aided Design) to create designs, especially commissions, which I would – and still do – drop into location images so people can see what a sculpture will look like in place. So when I learned about 3D printing, it was an easier leap for me than for people who didn’t already know CAD.

I still work in metal – in fact, that’s pretty much still my day job – and usually work on 3D printing at night and on weekends. Sometimes, though, it’s an interesting challenge whether to make a sculpture in metal or in filament, or both ….. 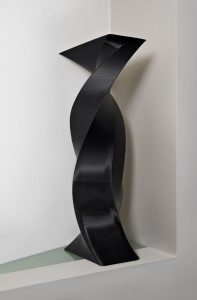 Sometimes sculptures I’ve designed in CAD would be difficult if not impossible to make in metal. For instance, even though I’m known for making metal flow, Black Mesa (right) would be crazy difficult to create in steel.

But there are times I use 3D printing as a prototype to get a better understanding of what a sculpture would look like in metal.

And then there is She.

I first created this sculpture in CAD, and everyone fell in love with it. She had such flowing lines, such attitude. Her name came easily – you can just see her in 4-inch heels and a slinky red, scoop-neck dress.  I 3D printed a couple of versions of She in PLA – she also looked terrific in translucent (which you can see in the opening photo) and black.

And then I decided to tackle this curvy sculpture in steel, 5 feet tall. 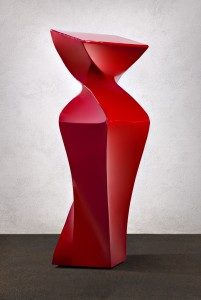 To twist metal, you need to stretch it in some places and shrink it in others. That’s harder than most people realize. I use a variety of tools to do it, from a slip roll to a hammer and anvil (yes, I still use these tools, a lot), to heat and various other nefarious and convoluted tools and methods. (If you’re interested in this sort of thing, check out my YouTube channel, where you’ll find hundreds of videos about fabrication.)

Nonetheless, I was willing to tackle She, which has some of the curves of Black Mesa, but none nearly as tight (I created Black Mesa after I made She).

Considering that I sold the metal She for a fair amount of money before it even left my studio, yes, it was worth it to go through the teeth gnashing it took to make it.

And no, the steel version is not exactly the same as the 3D printed version, which is OK, too, since a sculpture often finds its own path.

Whether a sculpture will be 3D printed only, metal only, or both depends on the form and well, honestly, whim. That’s one artists’ prerogative I’ll continue to exercise at will.