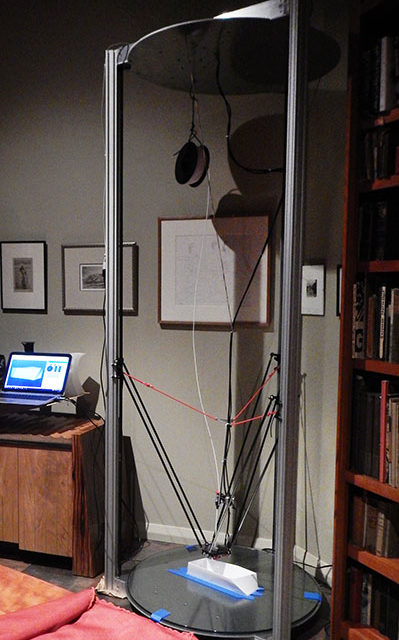 I’ve written before about how temperature-sensitive my 3D printers are, and it seems to be true of all three of them. From what I read online, I’m not alone in this challenge.

But I’m not satisfied to just live with it. I want to be able to print exactly what I’ve designed (or better).

I’ve done various things to mitigate the problem, from adding fans and adjusting their locations to adding heat lamps and, for my CubeX, adding a heated bed. Yeah, the irony is that you need to disperse heat in some areas and increase the temperature in others. 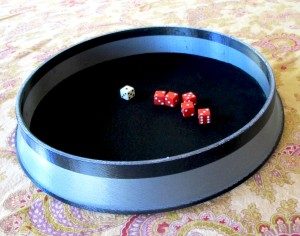 I’m finally pretty comfortable with what I’ve done to keep my 3D prints cool. I’ve added a couple of 48″ tall rotating fans around my  8-foot-tall deltabot 3D printer, the Cerberus 3D Gigante, that are able to cool almost the whole height of the prints, which can be as tall as 4-1/2 feet tall.

Now I’m working on how to address the distortion of the bases of my 3D printed sculptures.

I’ve been having issues with the bases warping and popping off of the print tray. It seems to happen when I don’t have supports inside of whatever I’m printing, but it just happened again with a fun little project, a Farkle board (above, left). (Most Farkle boards are square, but I thought, “Why?” and 3D printed a round one.)

The bottom of the Farkle board is quite thick, but I lost my first two attempts because they popped off the print tray. The one that printed (above) is a little warped on the bottom – just enough so it spins nicely but doesn’t teeter. I could put felt feet on it to stop the spin, but I think it’s actually kind of cool.

Still, I know I need to fix this problem. I hate wasting all that time and filament! And I want my prints to look right.

Because other printers – including my Cerberus 250 – have heated trays and I’m adding one to the CubeX to deal with cracking that I believe is from cooling too quickly, heating the tray makes sense. I’ve talked with Cerberus 3D’s Steve Graber about a heated bed for the Gigante, but apparently there is nothing large enough for the 34″ print tray.

I refused to let that stymie me. 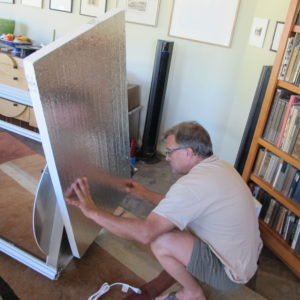 So I bought an extra large heating pad and a 2″ slab of Styrofoam that’s reflective on one side. I laid down the Gigante 3D printer and cut a notch in its aluminum frame bottom for the heating pad’s cord. I then cut the Styrofoam to fit into the triangular base of the 3D printer.

Next I laid the heating pad across the underside of the print tray and pressed the fitted Styrofoam, reflective side up, into the base to hold the heating pad. A little duct tape came in handy to keep it in place.

We then righted the printer.

The Gigante doesn’t look at all different except there’s a cord coming out of the bottom now, but I’m hoping this does the trick. 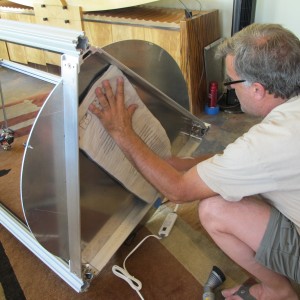 I’ve just gotten some awesome transparent red 3 millimeter filament and am chomping at the bit to try out a redesigned version of the sculpture Twin Peaks I printed recently.

I’ll need to wait until I’m around to keep an eye on it – if smoke starts pouring out of the base, I know I’ve got a problem!

It this works and the heating pad stops the bases of my 3D-printed sculptures from cooling too quickly and warping, I’ll have licked one more challenge. 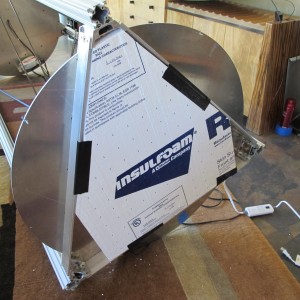 If it doesn’t, well, it’s back to the drawing board.