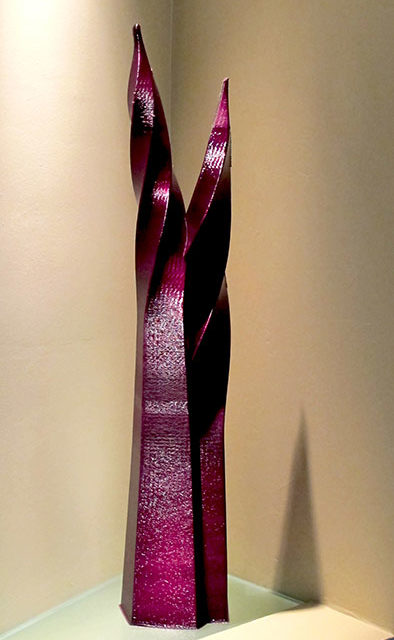 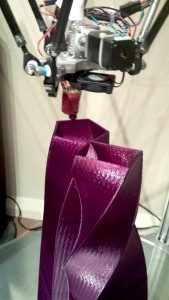 Must I learn everything the hard way? (Uh, on second thought, let’s not go there ….)

I am constantly learning the nuances of 3D printing software and hardware, usually by doing.

Each printer and piece of software seems to have its own idiosyncrasies, and while I’ve learned a tremendous amount from Steve Graber, who built both of my deltabot printers, I’m also learning a lot by making mistakes – or catching them before I do.

With my latest 3D print, I realized that I could have mitigated some of the burns at the top of the sculpture ….

This print, Twin Peaks, actually went pretty well. I had created the original CAD file in Rhino, which I’m still learning but at least am able to use, then sliced it in KISSlicer.

started the 3D print on my Gigante with some beautiful translucent purple filament. Without any interior support, two corners of the base lifted up slightly, but otherwise the print went perfectly as it climbed up past the joined base and as the sculpture split into its two peaks.

The 3D print progressed, but somehow, once again I had timed it so that it would finish in the middle of the night (I’ve gotta work on that). That meant that the two peaks, which narrow to points, would finish while I was trying to sleep so I could get up the next morning and get back to work on sculpting metal in my studio.

I did get up and check on the print about 2 a.m. and saw that the print was now above the height of the tallest fan, so I got out 4-foot-tall fan and aimed it at the print, then went back to bed.

When I got up at 5:30 a.m., the print was done. The front of it was gorgeous. When I popped the print off the print tray, though, I was sorry to see that the back of the peaks were burned. 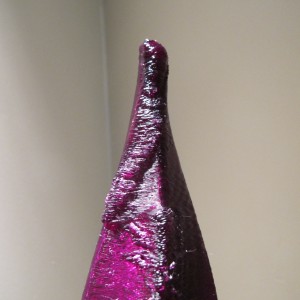 I’m still not unhappy with the sculpture, but I could have done without the lumps and ridges that appeared on the back.

I’ve revised the design and will undoubtedly print another version of this form, but this time I’ll make some adjustments:

1. I’ll time it so the print finishes in daylight hours. This is a little tricky, as the timing seems a little fluid, but it’s worth a try.

2. I’ll turn down the temperature more as the peaks narrow so the heat doesn’t build up as much. You don’t have to turn it down much – this was running at 205 degrees centigrade, and next time I’ll turn it down to 200 or 198.

3. I’ll add more fans sooner. I don’t know how I’m going to get a fan in the back of the 3D printer, but I’ll figure it out somehow.

4. I’ll slow down the flow, or speed. I’m now using the program Matter Control on the tablet that controls the printer, and it automatically adjusts the feed, or what it calls the “extrusion multiplier,” which controls the smoothness of the print, when you turn down the flow.

All this being said, I like the sculpture. It’s a little spookier and more ominous than I had anticipated, but all of the ways an artwork develops as it’s created is part of it coming to life, and the odd lumps and ridges add to this sculpture’s mystery.