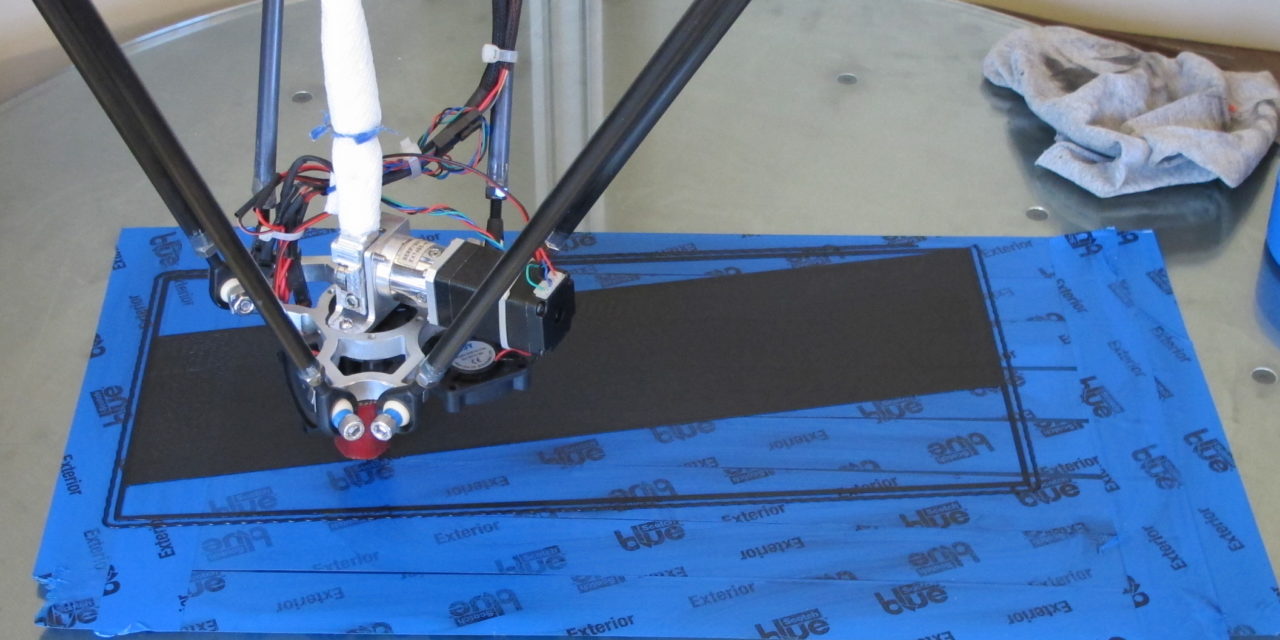 I don’t like to complain, but I have shared some of my trials with 3D printing here, so you have some idea of the issues I’ve had while trying to print my sculptures with my three 3D printers (believe me, I’ve spared you some of the worst hair-pulling, head-banging moments – why torture you, too).

As we’ve eliminated some problems with filament, adhesion to the tray, flying struts and more, I’ve become increasingly confident that I can create sculptures with these printers, especially the Gigante.

Part of that, of course, is that I’ve also learned to isolate problems and to fix them when they occur ….

Recently I designed a new sculpture in my Twisted Slab series. I like the opportunity to make geometric shapes dance, and this one definitely intrigued me.

I had no problem designing and slicing it, but the sculpture just didn’t want to print. The first fail was during an event for Spirit of the Senses. The attendees didn’t seem bothered, but I was sorry to lose a print that had been going for a day and a half. That’s a whole lotta filament, not to mention time. Oh well.

Because the piece lifted off the tray, I thought the problem was the tape I was using to adhere the print to the tray. When I next used another, stickier kind of tape, however, the sculpture-to-be lifted again. Hmmmm ….

The analytical skills I developed working in my foreign car repair garage kicked in. Not the filament … not the printer itself … not the tape ….

When I looked more closely at the base, I began to wonder if it was a design flaw. Was the top of the sculpture (I was printing it upside down) too thin? Was it not stiff enough to remain rigid?

I went back to the drawing board, literally in this case, and added a brim to the print. A brim is exactly what it sounds like, like the brim of a hat. In this application I made the brim three layers wide and two layers thick. After the print was finished, I’d just pop off the brim.

Take three: this time, things went much better. I got, oh, halfway, when the print failed. This time the print was adhering to the tray just fine – thank you, brim! – but it appeared that the tablet we’d added so that I didn’t have to use a full-size computer to control the print had just rebooted itself. Yeah, there was a new problem.

Fortunately, I’ve learned to edit GCode, and in this case, “mad scientist” Steve Graber, who built my deltabot printers, came down and helped me find the where the print had failed. We were able to restart it, leaving only a slight band to indicate where the 3D printer had stopped printing.

I also took the file and put it into the desktop computer, my old standby, and ran it from there. End around on that problem. (Later I downloaded an update for Matter Control, the program for the tablet. After that, the tablet didn’t work at all. I won’t give up on it yet, though ….)

With the file running off the proven platform of the desktop computer, we started it up slowly, which probably led to the next fail. Yes, the added part didn’t adhere right, lifting up and leaving a big gap. The good news is that I was able to lift off that part I had just printed.

I wasn’t giving up, though. I used the same revised GCode Steve and I had used, but this time I warmed up the existing part of the sculpture with a hair dryer and started printing at the same speed. The only other change was cranking up the heat on the filament a bit – I wanted it to stick this time! 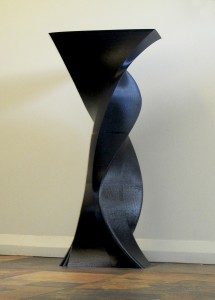 And it did. The sculpture printed all the way to the bottom, which was at the top, as I was using the “vase” command to print it upside down (I later printed a bottom that I glued on). The place  where we restarted the printer appears as a rather thin, elegant line. There are also some areas where the surface texture changed because I adjusted the print speed, and there are a couple of weird flaws that I can’t explain at all, but in general I’m really pleased with this sculpture.

Yes, at last it’s a sculpture (click here to see a larger image).

It’s not perfect – there is a thin line where I restarted the print and some areas that are more silky because I slowed down the flow, as well as a couple of hinky spots, one of which brings to mind Frankenstein (for unknown reasons, BTW), but I like this sculpture a lot.