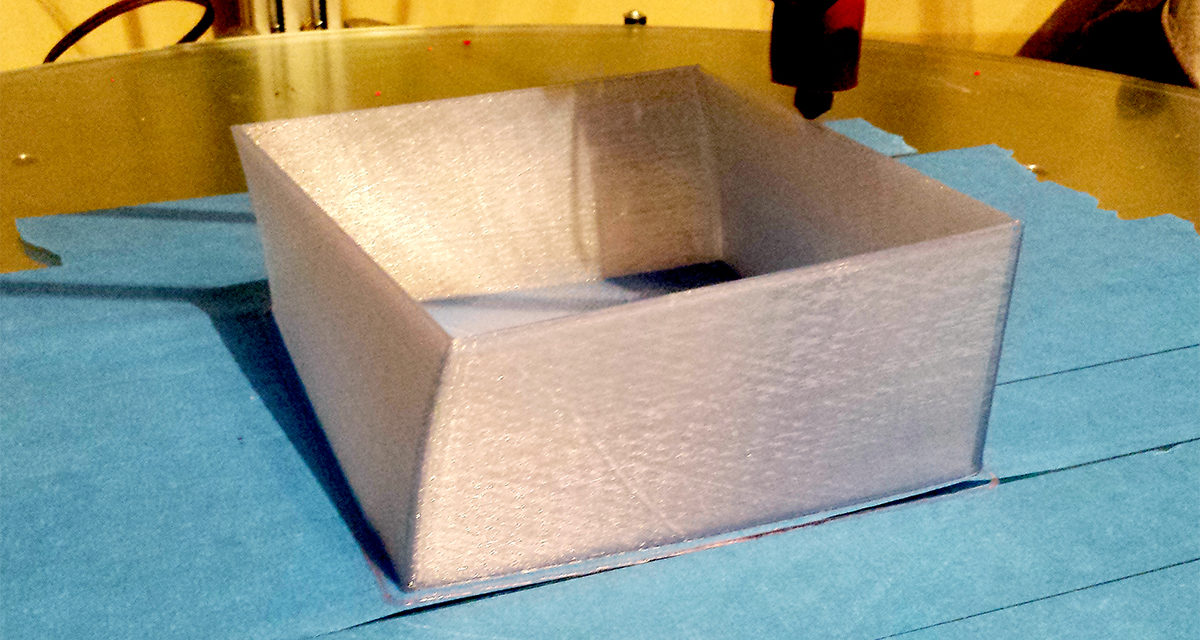 It’d been a while since I’d printed a large sculpture on my Cerberus 3D Gigante 3D printer, and I had a new design I wanted to try. So I sliced the file in KISSlicer, transferred the file to the printer, and started the print.

I’ve been avoiding really large prints – this 3D printer can create pieces as tall as 4-1/2 feet – because of the angst of printing for days on end. Glance, for instance, took five days of printing over a tortured 11 day period.

Steve Graber and I have made a lot of upgrades to the printer since then, though, so I had reason to be hopeful that this print would be peaceful and productive ….. 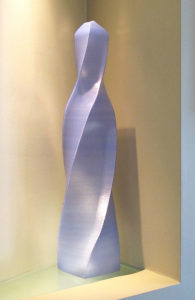 … and so it was. Thus begins a new era with the Gigante. I’m not suggesting that every print will be flawless from now on, but this experience is exactly what I’d hoped it would be, albeit slower (who named this “Rapid Prototyping,” anyway?!).

The printer had predicted that, running at 100% speed, the piece would take about 30 hours. The first night, my wife and I both woke up about every two hours to check on the print, and everything (except our rest) was going perfectly.

We got up the next morning to hear that ocean-like “whoosh, whoosh” of the printer making its passes, and were relieved to know that all was going as planned.

The print ran beautifully all day.  In fact, the texture on the print was so smooth and sleek, it looked more like glass than filament. We tiptoed over to the printer to check on it and spoke in reverent whispers as we watched it grow.

The second night, I happened to get up as it was getting close to completion – the counter said we were at 99.2%. There was no way I could go back to bed knowing that, so I just camped out to watch it finish.

I am so glad I did! The print probably took another 45 minutes, and they were critical ones. There are no supports inside this print (it’s hollow), and the top of the design comes to an offset angle. But the filament wasn’t cooling quickly enough, and it started to slump.

If I’d been more awake – it was just after 2 a.m. – I probably would have slowed down the print speed, which would have let it cool more quickly, but that would have changed the look of the print, so I really didn’t want to do that.

It did the trick. The top isn’t as flawless as the rest of the finish, which looks absolutely amazing, but it’s otherwise pretty much as it was designed.

Even though we don’t have official photos of it yet, the piece is getting rave reviews. Some people are calling it “The Ice Tower” and and others are commenting on its pearl-like color.

I’m just thrilled the print went so well – I have new confidence in my ability to create a finished print, and in the printer, too.