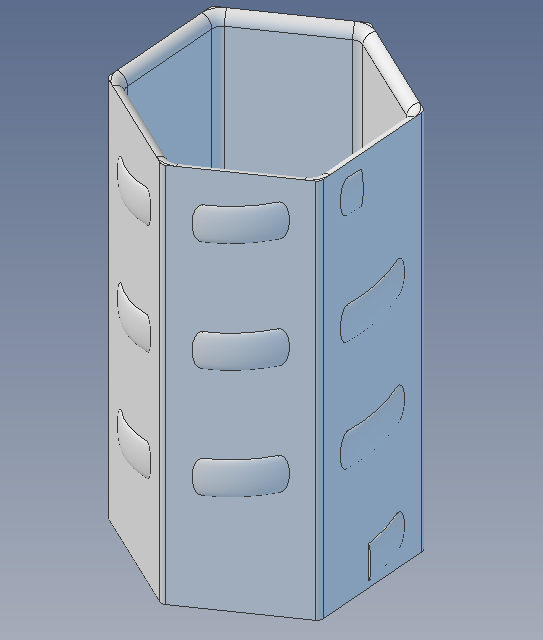 I’ve been playing with the CubeX and the Cerberus 3D 250 for a while and decided to take on a little project with Cerberus 3D’s Gigante deltabot printer.

I designed a hexagonal bin with swirling sections around the outside using Geomagic. I used the “shell” command, thinking it would give me a relatively slim container with the swirl embedded on the sides.

I still have a lot to learn about using CAD, translating through Kisslicer and into the printer …..

I thought the “shell” command would make the walls a single thickness because I only made it a few thousands thick. The rolled edges of the lip in the image should have, perhaps, alerted me that they were thicker than that – I’ll definitely pay more attention to the details of the image in the future!

Instead, when the piece printed (well, it’s still printing right now), it created a honeycombed reinforcement between two walls. An elephant will be able to sit on this sucker! 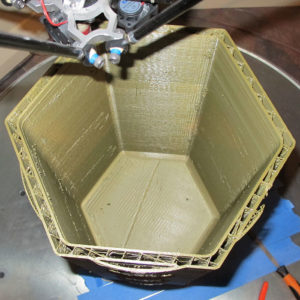 If what I’d thought was going to happen actually had, there would have been a single wall and the swirling section would have protruded from the outside, but looked almost like laces drawn tight.

Instead, I have industrial strength walls and the swirling sections look almost like handles.

Clearly, I have more to learn about Geomagic, CAD and 3D printing software in general.

… and more to learn about the slicing program, and how the software talks to the printer. I’m sure the problems are something I’m doing or not doing (all software developers hope we’ll believe it’s always our fault, and usually it’s true), and more experimentation is definitely called for.

For now, I’ll continue to bumble through, learning as I stumble ….