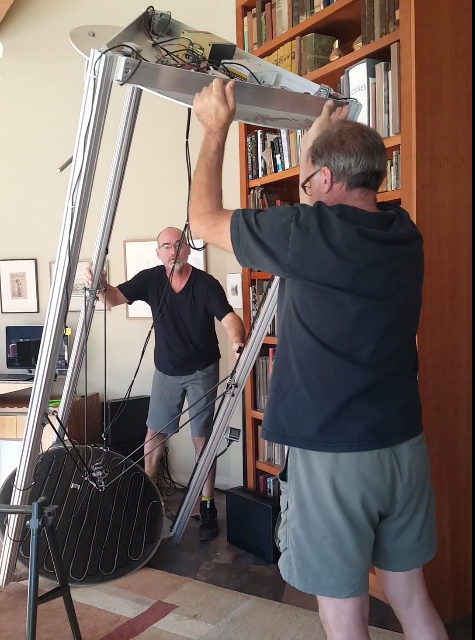 When I commissioned the creation of my 8-foot-tall Cerberus 3D Gigante 3D printer 3 years ago, I knew that the technology would change.

Of course, technology changes all the time, but in the fast-moving field of 3D printing, it changes as fast as you can type.

As chronicled in this blog, Cerberus 3D “mad scientist” and all-around cool guy Steve Graber and I made a lot of changes in the Gigante as we worked through the issues that arose when using the printer. Software, hardware and filament all demanded tweaking, and finally we got the Gigante running well.

There were still issues, though. The biggest was a tendency for the print to just … stop. The printer would freeze, and the computer would join it, stuck in some sort of limbo while I pulled my hair out trying to figure out why I’d just lost yet another print.

Sometimes it was simply that the computer, which is dedicated to running the Gigante, decided to update. I dealt with that by always firing up the computer well before I started printing. OK, that worked most of the time.

Finally, though, it became clear that the processor just wasn’t handling the information fast enough …. 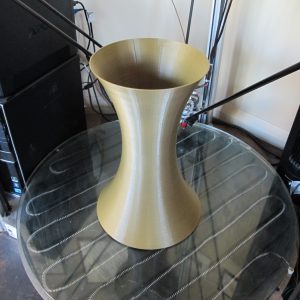 Technology to the rescue! Well, that and Steve, who continues to be a huge help in keeping the two Cerberus 3D deltabot printers I have running well.

Last Sunday, he came over for “surgery” on the Gigante. He’d just delivered the latest and greatest version of the Gigante 3D printer to Arizona State University’s school of art, and I was going to benefit from what he learned doing it.

We lowered the printer so we could get to the top of it, where the board was, and he replaced the main processing board to the most recent revision, 1.1.

There were lots of reasons this was a good idea. First, it upgraded the processor speed from 100 Mhz to 120Mhz. That should help prevent freezing.

Second, the new board has thicker copper tracers, improving current capacity and – this is important in Arizona, especially in the summer, as well as for the Gigante’s mega prints – cooler operation during long print jobs.

Too, the stepper driver resolution has been doubled from 16 microsteps to 32, which will help improve positional accuracy of the printhead.

The new board also has improved resistance to electromagnetic interference. We suspect that has been a problem, too, so while we were at it, we also added some ferrite beads to the lengthy serial bus cable to reduce interference.

Finally, the new board has an Ethernet connection in addition to the standard USB connection. While that doesn’t affect the way I work now, it will allow me to print wirelessly via a network in the future, if I decide to go that route.

Steve ended up making a number of other adjustments to get everything working right, and before he left, I threw a spool of filament on the Gigante and started a print. About 20 hours later, I was pleased to pop a pretty flawless print (right) off the bed.