Warts and all: 3D printing flaws part of the beauty 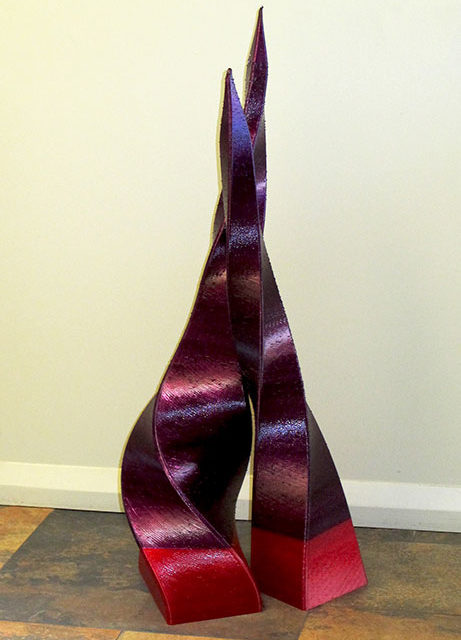 As a sculptor, I embrace beauty.

I’m not one of those difficult artists or even one who uses my work to communicate political or social positions. (That’s fine, BTW, but it’s not what I do.) Instead, I want people to be moved by the visual or tactile impact of my work.

That being said, I don’t think things have to look “perfect.” I like imperfections and unexpected eventualities and often embrace them in my work. That makes the apparently nearly inevitable vagaries of 3D printing my own work part of the discovery of making art for me.

Such happy accidents are definitely evident in my latest 3D printed sculpture, Love and Marriage ….

I was really happy with how well everything went during the two plus days it took to print. The printer behaved itself beautifully throughout the process. I started it with some translucent red, then switched to translucent purple. The sculpture’s two “towers” built beautifully, except for the warts. 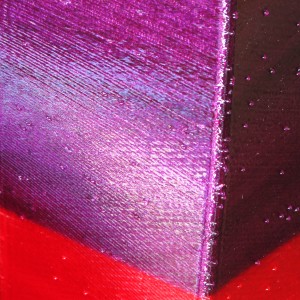 OK, you could call them “bumps” or “pimples” or whatever you want, but small nubs appeared all over the sculpture. They are random, almost like slubs in fine silk, and although I could sand them off and patinate or paint the sculpture, I really like the texture they add to the piece. The nubs contrast beautifully with the shiny slickness of the printed resin.

Steve Graber, who built the Cerberus 3D Gigante printer I used to create this 41″ tall sculpture, has confirmed that they were likely caused because the suck function on this printer does not work. It probably means something is wrong in the wiring, because it did work at one time.

In most printers, the suck function draws a bit of the hot resin back in as the 3D printer begins a new layer. When it doesn’t suck that back, there’s a little excess resin, hence the nub. Steve is working on that issue so that I won’t have the nubs on all of my 3D printed sculptures.

Curiously enough, though, this actually the first time they’ve appeared like this. I actually love how they add texture to this particular sculpture, but I wouldn’t want them on every piece. 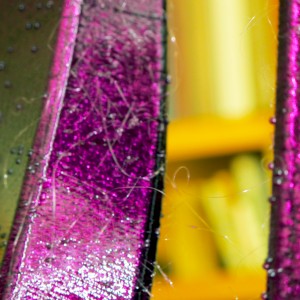 That wasn’t the only strange aberration on this  sculpture, however. Some wild looking “hairs” (watch out, Donald Trump!) also formed mostly ran between the towers. I’ve  freed these resin strings and now they are just wild. At first I thought I might snip them off, but I’m starting to actually appreciate their serendipity and, well, furriness.

The hairs were caused by the fans I have positioned on both sides of the printer. Yes, while the heating pad keeps the print tray warm, I want to keep the sculpture cool as it builds, and the fans do a good job, even when it is 110 in Phoenix (which is not unusual during the summer).

As I learn more about adjusting the flow and speed based on the design of each sculpture, the number and types of surprises will likely diminish, but for now, I’m enjoying the unexpected beauty that the 3D printing process brings to my work.