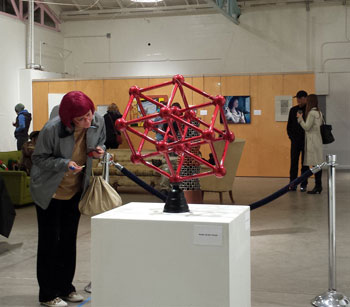 Kevin was all over the Valley of the Sun at the end of 2013, beginning with the Sonoran Arts League‘s “Hidden In The Hills” studio tour, in which he joined four other artists at Barbara Bowman’s north Scottsdale studio. Next up was the Arizona Guides tour at his own studio, followed by “Fiasco: The Art of Failure” (right), an art show in downtown Phoenix.

“Hidden In The Hills” went well despite three days of pouring rain. “We learned a lot,” Kevin says. People came from around the country for the show, so Kevin attracted many new fans.

The Arizona Guides, who show people around the Grand Canyon State, were an energetic group – Kevin looks forward to seeing more of them!

“Fiasco” was a fascinating show. Most of the artists were from Arizona State University. Kevin was invited by one of the students, and his piece Tess (shown above) was featured in the gallery’s front window. “This is a great gallery,” Kevin says. It’s in the Grand Avenue section of the downtown Phoenix art scene, which has a very different feel from Roosevelt Row.

“It was a busy time, but a really fun one, too,” admits Kevin. “It was a fitting end to a great year!”

IN THE PRESS: PHOENIX MAGAZINE AND SO SCOTTSDALE 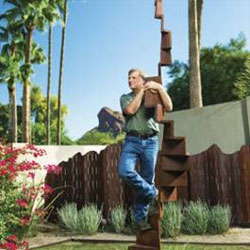 Phoenix Magazine‘s story about Kevin reached subscribers in late December, and the phone started ringing immediately. “People really reacted to this article,” says Kevin. The story by Niki D’Andrea and the photos (one is at left) by Brandon Sullivan told Kevin’s story beautifully.

Next up is an article in the magazine So Scottsdale. It covers Kevin and hisinvolvement with Free Arts for Abused Children of Arizona, which expands the horizons of youth at risk through the magic of art. Last year, Kevin had eight Free Arts kids to the studio, where they created sculptures, and he donated to Free Arts’ auction. In 2014, he will again donate to the auction, which will be held at Neiman Marcus at Scottsdale Fashion Square on Saturday, March 8. The article will appear in So Scottsdale in February.

UNDER WAY IN THE STUDIO 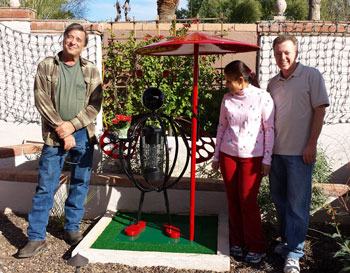 Lady Bugme, the functional site-specific sculpture, is completed and installed (right, with its owners, just after installation). “They have a big event coming up, so it was important to get it done and installed before that,” says Kevin.

He’s also completed the large 4-cube tesseract that he was working on, which is now titled Tesseraction. “Because it spins, it earned its name,” Kevin explains. (Its massive bearing, which allows it to move, is shown below.) Currently the sculpture is at the painter, getting what should be an amazing finish. “I am experimenting with new kinds of finishes,” Kevin continues. “I hope this one in particular works with the kinetic nature of the piece.” See Tesseraction after fabrication was completed. 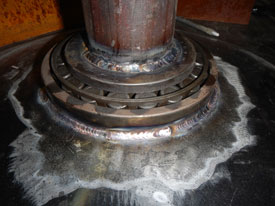 Kevin also is now back to work on a monumental sound sculpture with a dramatic flowing base. “This one has been really challenging,” he admits.

New this year are open studio days. “We have a lot of people who want to see the studio, so we thought we’d try scheduled open studio days,” says Kevin. The studio will be open the third Sunday of every month, pending interest. If you’d like to join Kevin, please contact him at info@kevincaron.com or 602-952-8767.

<palign=”left” style=”MARGIN: 8px 12px 8px 16px”>You can always see what Kevin is working on in the Works in Progress section of the Web site – it’s updated often.

Kevin keeps rolling along in front of the camera, too. He continues to get an amazing number of emails and comments from fans of Channel Kevin, his YouTube channel (all of the videos also appear on his own Web site).

Please enjoy these videos that have appeared since the last newsletter:

ONE OF YOUR OWN?

Kevin just installed DNA at a Scottsdale residence – maybe it’s your turn to own a Kevin Caron sculpture.

For more frequent news, sights and sounds, keep an eye on Kevin’s Web site at www.kevincaron.com – we update it often – or “like” the studio Facebook page.