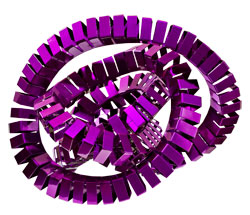 Kevin’s sculptures Dorothy’s Nightmare, CounterSink (below right) and Rush have gotten a great response at the show. “It’s interesting to see how different people are drawn to each one of these sculptures,” says Kevin.

The show runs through the end of August. Kevin will be in attendance for several Friday evenings during the show, including July 19, August 2 and August 16. He looks forward to seeing you at MonOrchid, a converted warehouse originally constructed by legendary builder Del Webb in 1937, one of downtown Phoenix’s most respected galleries.

For a map to MonOrchid, located at 214 E. Roosevelt in the heart of Phoenix’s gallery district, please visit the Events page, where you’ll also find information about other events, as well as below ….

Kevin capped his fourth cross-country motorcycle trip outside of Winfield, Kansas, with a video shoot with Weld.com.

“I had such a terrific trip, riding up the Blue Ridge Parkway and relaxing on the East Coast. On the way home, I spent a day in St. Louis going up inside the Arch (left) and visiting CityGarden, an amazing sculpture garden,” Kevin recalls.

“The shoot in Kansas was a perfect ending to a great trip.”

Kevin stopped on his way home in the town of Geuda Springs outside of Winfield to film videos with Weld.com’s “Mr. TIG,” Wyatt Swaim. “Wyatt has incredible experience with TIG welding, working on Indy cars and in the aerospace industry, so it is a real honor to collaborate with him,” says Kevin.

Kevin also enjoyed shooting with Todd Clouser and Chip Cable of Weld.com (see opening photo, top right). “What a great team!” Kevin says. “I am totally aligned with their commitment to integrity, ethics and honesty, and an appreciation of what welding can do. I look forward to working with them and expanding Weld.com in the future.”

The first collaborative video was released simultaneously on Channel Kevin and Weld.com on July 18.

Now that Cosmography and Charged Particle are finished have their official photos (just click on their names to see them), Kevin has been working on the stand for a new sound sculpture and The Runner. 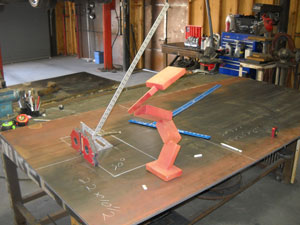 “I finally have the [sound sculpture] stand on its feet, so to speak,” says Kevin. It takes a lot of work to get the upper part of a stand stable enough for that step. See it thus far on its own page.

As for The Runner, creating it is the culmination of many years of interest in this form. Originally conceived as one of three proposed sculptures for a public art commission, Kevin also did a video series on creating a maquette of the sculpture on his 3D printer. “I just couldn’t get this sculpture out of my mind,” Kevin says. Now he’s building it full-size for his upcoming fall show at the Chandler Center for the Arts. See the progress of The Runner on its own page.

Kevin also continues to work on several new ocotillos and Shitake Agaves. “It’s nice to have several pieces to work on at once,” he says. “Sometimes my mind needs a rest from a sculpture, and sometimes – especially this time of year – a piece just needs to literally cool down so I can work on it.”

Meanwhile, the new “gang” of Street Urchins awaits its finish …. See the new versions awaiting their finish on their own page.

You can always see what Kevin is working on in the Works in Progress section of the Web site – we update it often.

In addition to adding the usual flurry of new videos, this month marks the upload of the first videos filmed with the Weld.com team. “We had a lot of fun filming,” says Kevin, “and I think we were able to offer some really helpful information.” Stay tuned for more videos featuring Kevin and Wyatt “Mr. TIG” Swaim. 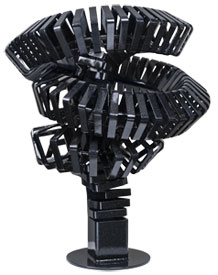 For more information about “Second Time Around,” please visit the Press page.

ONE OF YOUR OWN?

Torsional Twist just went to its new home – maybe it’s your turn to own a Kevin Caron sculpture.

For more frequent news, sights and sounds, keep an eye on Kevin’s Web site at www.kevincaron.com – we update it often – or “like” the studio Facebook page.