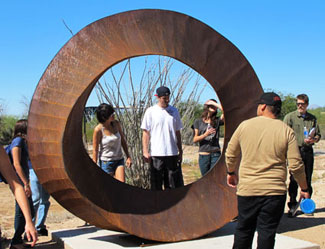 The reception also attracted the attention of the media. “Apparently there were three TV news reports filmed in front of Wherever You Go,” Kevin says.

“I was really gratified by the response to the sculpture by reception attendees and the college administration and students,” he continues.

The sculpture will remain on campus as part of the exhibition for one year and then will be available for purchase. See photos of the finished sculpture on its own page.

On a balmy October weekend, a camera crew from Mindclover Productions took over Kevin’s studio to film a movie about a sculptor who has a favorite sculpture stolen. “The subject was a little close to home,” admitted Kevin, who has had two sculptures stolen.

“We couldn’t have filmed in a better location,” says director Diane M. Dresback. The seven-minute short, “Spark,” was submitted to the IFP Masterpiece Challenge.

Kevin was able to provide technical assistance to make the actions of male lead Kane Black as realistic as possible, and viewers can see many of Kevin’s sculptures in the film. The movie was screened Tuesday, November 13 at the Phoenix Art Museum.

To see the movie trailer – which prominently features some of Kevin’s work – and a larger version of the movie poster (above, left), visit http://mindclover.com/Trailer%20and%20Promo%20Pages/Spark.html

There’s more information about all of the events below on the Web site’s Events page….

Mark your calendar now – these events will be here before you know it. Learn about these events on the Web site’s Events page.

Big Bang has certainly been fulfilling the promise of its name. “People have reacted strongly to it,” Kevin says. Its nickel-plated finish has attracted a lot of attention, as has its dynamic form. “People see so many different things in this sculpture,” he continues.

Kevin also has completed two commissions, a “super Shitake Agave” for a railroad owner in Alabama, and Fire Mirror, an architectural sculpture for a couple in Arkansas. “Both patrons seem quite pleased,” Kevin says. “I enjoy the challenge of bringing together the people, places and purpose in commissions – they’re just another kind of creativity.”

Meanwhile, Kevin continues working on a series of sculptures based on the 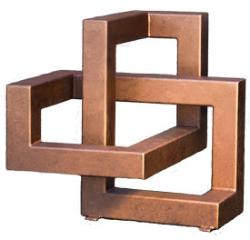 geometric form the trefoil knot. Knot Me, a midsized sculpture based on the never-ending knot, now also has its antiqued copper patina. “This sculpture’s finish is something new,” Kevin observes, “but I’m enjoying getting more color and texture into my finishes.” Knot Me’s stippled surface contrasts subtly with its controlled form.

Kevin also has nearly completed his smallest version yet of the trefoil knot. He has carved MillKnot out of a solid block of aluminum on his mill. See it here. Kevin is fabricating another, more complex interpretation in aluminum square tubing. “This form fascinates me,” he says. 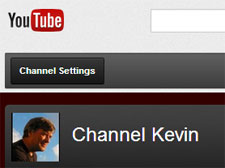 Every week, Kevin adds another video to Channel Kevin, which appears simultaneously on YouTube and on Kevin’s own site. His YouTube channel’s more than 3,800 subscribers have viewed his videos more than 2.6 million times. Four videos have more than 100,000 views and 46 have more than 10,000 views.

His collection of 225 videos primarily focuses on how Kevin does his work, which is, in his case, about more than just tools. “My work is informed by the proportions and mechanics of the equipment,” he explains.

Here are Kevin’s latest videos, including the final two in the series “How to Create a Sculpture,” in which Kevin delivers and installs the sculpture Wherever You Go, There You Are:

ONE OF YOUR OWN

For more frequent news, sights and sounds, keep an eye on Kevin’s Web site at www.kevincaron.com – we update often.