Let there be light (with 3D printed translucent filament)

In February during my one-person show devoted to my 3D-printed sculptures, I heard many interesting comments and questions.

One thing I was asked repeatedly is whether I’d ever put lights into a 3D printed sculpture.

The subject came up so often, in fact, that, of course, my mind got going …. 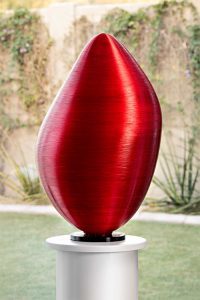 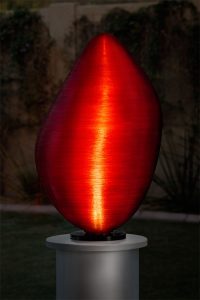 I thought about just building a pedestal with a light in – that came up a couple of times, too, and I may still do that someday.

It’s easy enough to design a sculpture with an opening for a light – which would be helpful whether the light is in the pedestal or in the sculpture itself – so I decided to print a large, distorted oval I would eventually title Opioid, with a void in the bottom.

I then found some lights that look so much like hockey pucks the company actually refers to them as pucks.

Instead of putting a light in a pedestal or in the piece itself, I ended up printing a new, low-profile black base for the sculpture. Now that I had the light in hand, I built in a groove for the light cord while I was at it.

I love how the light shoots up the center like a flame while it illuminates the entire sculpture and makes it glow ….

I’m so happy with it, I’ve printed another black base and ordered light for the failed print that is now destined to be a side table.

And who knows what the future may bring …..